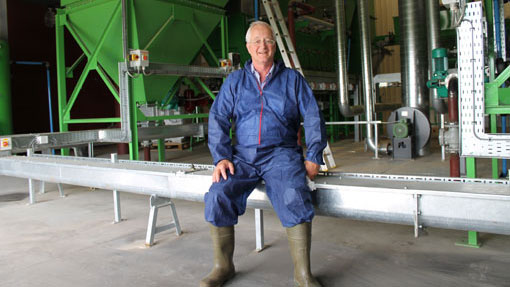 Poultry World talks to two farmers pioneering litter burning to generate energy to heat their chicken sheds. Although legislation is playing catchup here in the UK, they hope to one day mitigate the cost of removing litter while turning it into a source of heat.

Two of the country’s largest broiler producers are leading the drive towards burning poultry litter on their farms as a way of producing sustainable, green energy from what is currently a waste product.

Nigel Joice (pictured) produces 840,000 birds at his Uphouse Farm in Norfolk, while Stephen Hay, of Hay Farms, produces broilers on 12 sites in England. Both have recently installed biomass boilers that are capable of burning chicken litter to produce hot water, which is then circulated to the poultry sheds for heating.

But under current legislation, the units are limited to burning woodchip, as poultry litter is still classified as a waste material when combusted and cannot legally be burned on farm, though they are optimistic that that will change soon.

At Uphouse Farm, Mr Joice has installed two 500kW burners, supplied by Biomass Heating Solutions from Ireland. The woodchip is stored in two 400t clamps and automatically fed along a conveyor into the boilers at the rate of about 5t a day in the summer, and 10t a day in the winter.

The boiler has a fluidised bed combustion chamber, with a bed of sand through which the primary combustion air is blown from below. The sand is preheated to a temperature of 850C, so the litter will ignite and burn efficiently, despite its relatively low energy value and high moisture content. The burners will work at up to 60% moisture, producing 6% fly ash and 2% clinker, which is self-cleaned and can be sold for fertiliser and breeze block production, respectively.

The water is held in a 75,000 litre buffer tank and is pumped through a district main that has been installed around Uphouse Farm delivering hot water to all 16 sheds at 82C. Draper recirculation units in the apex of each house distribute warm air to the growing birds, while the hot water is returned to the boilers where it arrives at 78C for reheating.

Mr Joice reckons on a 50% cost saving compared with using gas, and has calculated a seven-year payback on the £1.8m investment. The environmental impact is also minimal and he is able to claim support under the government’s Renewable Heat Incentive scheme.

“I’ve always thought of chicken manure as being something more than waste and that there was a better way of using it than just giving it to arable farmers,” he told Poultry World. “I also wanted to be in control of my own power costs. If we can get the Environment Agency to say litter is not waste, then we’re in business.”

Strong economic and environmental arguments have also persuaded Stephen Hay of Hay Farms to install a biomass boiler at one of his broiler units near Stratford-upon-Avon in Warwickshire, with a view to burning chicken litter.

“Feed, chick and energy costs are our three biggest costs on farm – we can’t do much about the first two, but we can control the energy input,” he told last April’s South West Chicken Association conference in Devon.

He approached Biomass Heating Solutions to install a boiler and generator on site, to produce his own heat and electricity. He also built a large, biosecure barn in which to house the equipment and store the litter. “All the air in the store goes through the combustors, so there is no smell or biosecurity risk.”

One tonne of shavings-based litter will produce 1,920kW of heat, and each crop’s litter will heat and power the next crop of chicken.

The combined heat and power unit produces 300kWh of thermal and 40kW of electricity, which can be used on site or sold to the National Grid. The 500kWh boiler produces enough hot water to eliminate any requirement for gas, so Mr Hay’s gas bills have dropped from £65,000 a year to nil, and his £43,000 electricity bill has halved.

The boilers supply 10 houses – a total of 381,000 birds – with a thermal demand of 800kW an hour. “I want to put in another combined heat and power unit to produce enough electricity for the site; I want to be self-sufficient in energy. Because the fuel stock is on the farm, we are in control of our energy costs.

Each house has four fan-assisted radiators to distribute the heat. With drier litter, reduced ammonia and carbon dioxide levels, and a more even house temperature, bird performance has also improved.

Mr Hay and his sons plan to roll the system out across the entire business. “At today’s energy prices, the investment has an eight-year payback, including the Renewable Heat Incentive and Feed-in Tariff. In effect we have capitalised our energy costs for the next 20 years.”