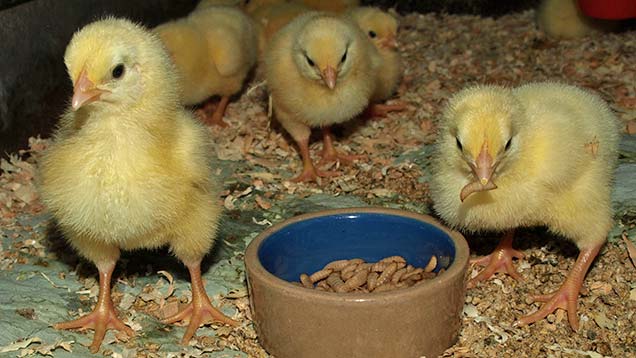 Researchers in the Netherlands are looking at how the inclusion of insect larvae may improve the diet and enrich the environment of commercial poultry.

A small-scale trial, which began on 6 July, will, for the first time, determine the effect of feeding live insect larvae to broilers in a replicate of a commercial setting.

Four pens of 250-day-old chicks have been used for the trial.

One is a control, and the remaining three have 5%, 10% or 15% of their diets supplemented by black soldier-fly larvae.

See also: A review of feeding insect protein to poultry

The birds will be grown to about 2.3kg, according to Leon Marchal, a director at For Farmers, which is conducting the research alongside Wageningen University’s entomology department.

“The most important research question is whether the chicks are growing healthily and at a sufficient rate in comparison to a traditional diet,” he told Poultry World.

While it was too early to give a definitive answer, he said the birds had exhibited increased activity levels and expressed what could be considered natural foraging behaviour (see video, below).

Another concern was the birds’ ability to digest whole, live larvae – especially at one day old.

There was little to suggest they struggled with the bugs, he said.

While these early results appeared promising, future trials would have to consider the impact flies may have if they hatched from the larvae.

But it had the potential to convert waste protein from food manufacturing into a viable source of livestock protein.

Mr Marchal said he hoped the research may prompt more investment in scaling up the production of larvae for animal feed.

He added that the inclusion of live insects in layer diets could be a tool in reducing feather pecking.

The results from this initial trial will be published in September.