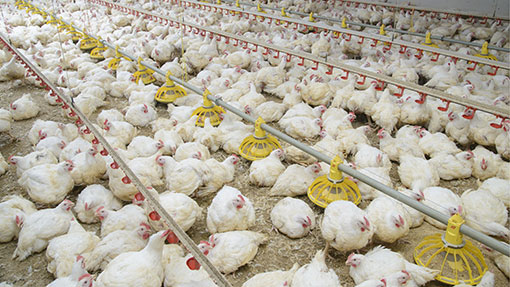 Their farm is a beef and arable unit and, having stopped growing potatoes, the Rogers were looking for a new enterprise to add another income stream. They secured a contract offer from Cargill Meats Europe for 80,000 birds a crop.

Ian Pick Associates from Driffield, East Yorkshire, was instructed in February 2013 to pursue planning permission for the sheds.

The application received no objections from statutory consultees, but was subject to intense opposition from local residents and others. The application was also listed on the Broiling Mad website, which co-ordinates opposition to numerous poultry planning applications in the west of the country.

The application was presented to the local planning committee in December 2013 with an officer recommendation of “approval”. But, due to public opposition, it was narrowly refused.

An appeal was subsequently lodged with the inspectorate. Powys County Council then resolved to withdraw all reasons for refusal, after which the planning application was resubmitted.

This second attempt was subject to a further campaign of objection. Reasons included the impact of dust emissions, the loss of recreational, historic and residential amenity, the damage to tourism, the increased risk of flooding and pollution concerns.

But again, officers and statutory consultees supported the application, which was presented to the 9 October planning committee, with the benefit of an IPPC permit agreed by Natural Resources Wales.

According to Mr Pick, the meeting was attended by approximately 100 objectors, including some from as far afield as Devon. “Simon Rogers commented that he has lived at Upper Heath all his life, and the family for 105 years. The Rogers family are part of the community and only recognised a handful of the objectors as being local to the site.”

After much heated debate, the application was approved at eight votes to four.