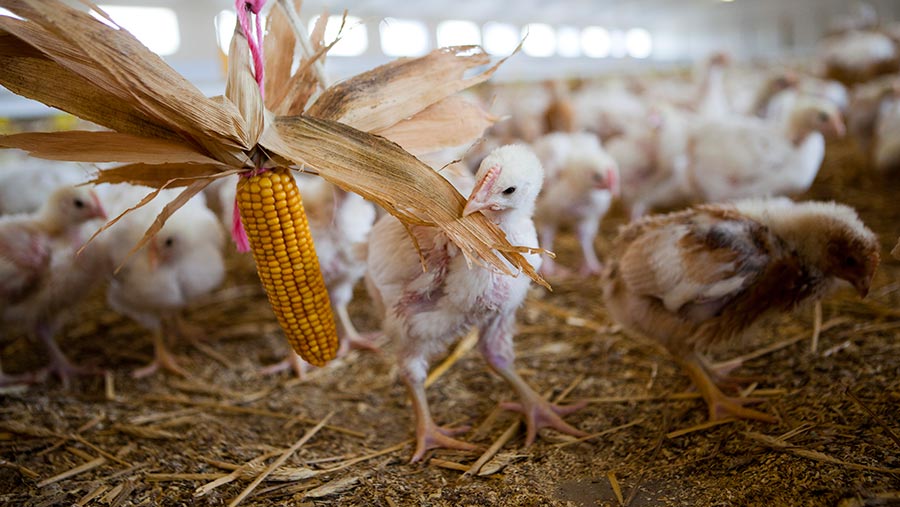 A campaign to radically change the way broiler chickens are produced has been gathering pace across Europe.

It stipulates a change in breed type, stocking densities and lighting levels, among other standards. So what are the implications for poultry producers?

One of the biggest influences on broiler production over the coming years is the pressure on retailers to adopt the Better Chicken Commitment (BCC).

The campaign is an initiative involving a coalition of European animal welfare groups, including the RSPCA and Compassion in World Farming, to improve the life and health of broiler chickens through improved husbandry. (See box below “What is the Better Chicken Commitment”).

See also: The new EPEF 420 broiler standard and how to achieve it

Cost of rearing a conventional broiler
£1.81

While the commitment is not enshrined in law, the coalition is asking retailers and food outlets to pledge to source chicken only from producers applying the higher welfare standards by 2026.

A number of retail business across Europe have already committed to the scheme, including some UK businesses (see box). But what might it mean for farmers?

They found significant differences in three areas, which are likely to present considerable challenges for producers.

Broilers kept to ACP standards can be reared to a maximum stocking density of 38kg/sq m (compared with 42kg/sq m in the rest of Europe).

In order to do so, the stockperson responsible for them is sufficiently qualified and the farm registered with the Animal and Plant Health Agency (Apha).

By law, housing must be able to maintain a comfortable environment for birds with dry litter, even in extreme weather conditions.

It is broadly agreed that higher stocking can be associated with poor welfare – and lowering bird densities can improve growth rates and gait scores.

But the effects do not change linearly and are not consistent over all welfare indicators, such as leg health, mortality, growth rate or bird activity.

Environmental and litter management is instead considered a more effective way to deliver better welfare outcomes – and research has found little difference in the integrated welfare scores of birds stocked at a range between 23kg-47kg/sq m.

In terms of sheer space needed, a shed rearing broilers to Red Tractor standards can house almost 30% more birds for every growing cycle, and total liveweight per square meter is about 50% higher, according to Adas.

Only broilers that meet the criteria of the RSPCA’s Broiler Breed Welfare Assessment Protocol are permitted by the BCC, because they “demonstrate higher welfare outcomes”.

A significant part of this is that growth rates are limited to 60g daily liveweight gain. “There is no explanation as to how this threshold has been determined,” says Mr Lowery.

Birds are tested by the RSPCA under low stocking densities (18kg/sq m) in small trial pens.

According to Mr Lowery, these conditions are not commercial and can lead to higher growth rates than those seen on-farm in some broiler breeds, potentially leading to issues with leg health and footpad integrity that may not be present in field conditions.

The BCC calls for lighting in sheds to be at least 50 lux, with windows installed to provide natural light. Most poultry sheds in the UK now have windows installed, or will have to in the coming years if they wish to remain part of ACP.

But the review conducted by Crowshall could find no indication of a welfare benefit to increasing the light intensity to that level.

Instead, Mr Lowery suggests assessing how chickens perceive brightness would be a more effective way to determine welfare benefits based on lighting.

What is the Better Chicken Commitment

Almost two years ago, a sparse document appeared on the website of several NGOs and charities concerned with animal welfare.

It was styled as a letter addressed to businesses in the poultrymeat supply chain and signed by about 30 groups, the RSPCA and Compassion in World Farming included.

It called for changes to the way broilers are produced across Europe by 2026. Many of which, such as the provision of natural light and enrichments, are already common in the UK.

The campaign has moved on. Today there is a slick website calling on consumers to “choose happy chicken” that features compelling videos and animations.

Tesco is understood to be running a limited trial of the concept, and the UK’s biggest poultry integrator, 2 Sisters Food Group, says it is creating a brand that meet the guidelines.

The NFU has said that, if the market moves towards producing birds to BCC guidelines, then farmers must be fairly compensated for the extra costs they incur.

The six BCC standards that producers will need to meet