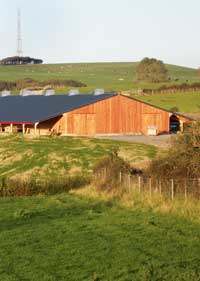 Putting up a new building requires careful consideration, not least about the environmental impact, as Debbie James reports

Cost was not the only influential factor when a west Wales free-range egg producer opted for a timber structure for housing an additional 16,000 layers.

Hywel and Anne Williams were keen for the new building to integrate in the landscape of their 100-acre beef and sheep farm near Aberystwyth and were confident they could achieve that with wood.

The Williams’ had previously erected a steel-frame building when they first went into egg production with 5000 hens three years ago, but had they chosen that option for their recent expansion it would have cost 30% more than wood, they say.

The couple also believe it would have blended less favourably with the greenfield site. “The building is long and narrow so we needed it to absorb into its surroundings,” Mrs Williams explains. “The wood looks very natural. The new packing room links the old and new sheds on the same level and the new building then drops six foot to match the contours of the field.

“We have undertaken extensive tree planting which, in addition to providing cover for the birds, will add to the aesthetics of the enterprise as the trees grow and mature.”

Mr and Mrs Williams established their poultry enterprise as a means of making their livestock farm more profitable. But when the contract with their sole buyer ended, they realised the size of their unit made them vulnerable.

They hadn’t planned such a major expansion because they both have jobs off-farm, but when they did their sums a 16,000-hen flock was the most viable option. This number of hens enabled them to secure two new contracts, with Mid-Wales Eggs and Stonegate, and to take on a full-time employee.

A major feature of the building, supplied by Northern Ireland company James Killen Ltd and fitted by Potters Poultry, is open verandas on both sides which encourage the hens – Shavers and Hy lines – to range even in poor weather conditions. This, says Mr Williams, improves the environment in the shed. “We have verandas in the old shed and they have been fantastic. We would not have contemplated building a new shed without these,” he says.

Another important feature is the multi-tier aviary system because it means the Williams’ can house 4000 more birds than with a flat-bed system. They believe the multi-tier feature has led to a lower incidence of floor eggs and a calmer flock.

“The birds like flying from one side to the other; there is constant movement up, down and through the system,” says Mrs Williams. “They are able to conduct all their natural behaviours, far more so than in the older shed.”

After seeing the benefits of multi-tier the Williams’ installed perches in their existing shed.

The new shed is unheated, but has powered ventilation. Twelve large pre-set fans, triggered according to the shed temperature, draw stale air up and out of an open roof ridge. There are also adjustable side vents that draw air in. “When we need to get more air into the shed in the summer we can open the inlets wider,” Mr Williams explains. 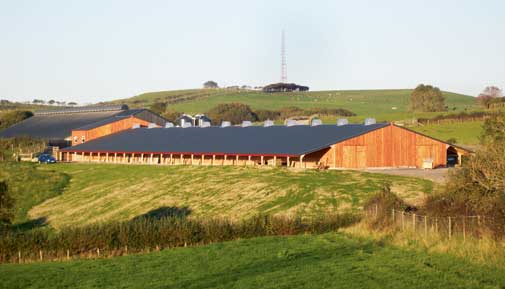 Lighting is available on all levels to minimise floor eggs and includes “dawn to dusk” lighting with a slow dimming of light, mimicking natural daylight. This provides ample time for the birds to wake up gently in the morning and to find perches, and settle to sleep in the evening.

A flat chain feed system delivers feed to the hens and there is a mechanised belt system for cleaning the aviaries three times a week. “By mucking out regularly we will probably have less flies and the air quality will be better because there will be lower levels of ammonia.”

Although they have a grader in the 5000-hen unit, they have only installed a packing machine in the new shed so these eggs are sold ungraded. It takes the same amount of time to pack 16,000 eggs as it does to grade 5000 with the old grader.

Mr and Mrs Williams have a team of willing packers in their five children, Ben, Harry, Edward, Kate and Rob. “It’s a team effort, every one helps during the holidays and the three youngest also help us pack before they go to school in the mornings,” says Mrs Williams.

James Killen Ltd started building commercial poultry houses in Northern Ireland around 40 years ago and continues to cover the British market from its base in Co Down.

Projects are wide-ranging, from duck sheds in East Anglia to grandparent breeder sites in Northern Ireland. Flexibility and innovation have been the company’s key marketing strategies. For example, Killen Clad low maintenance cladding was developed because of retailer requests. A new addition to the range is clear span steel buildings.