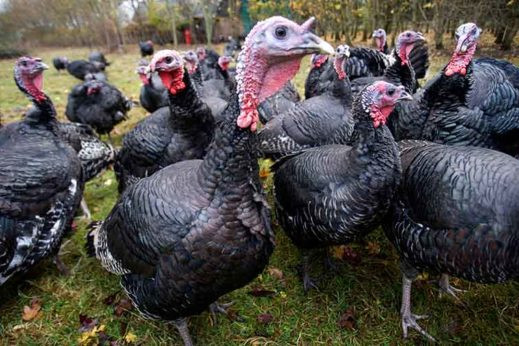 However, some farms found it a challenge to secure enough seasonal workers for plucking and processing.

“Our sales were up – we sold out, as many others did – and we supplied more outlets too,” said Patrick Lambert, of Buckinghamshire-based Starveall Turkeys, which produces some 5,000-5,500 birds annually for the festive market.

Farmgate sales were up 20% on the year, Mr Lambert told the annual Christmas post-mortem meeting of the Anglian Turkey Association, held on Tuesday (10 January), at Prested Hall, Feering, near Kelvedon, Essex.

Mr Lambert said he believed a number of reasons were behind the bumper increase in demand for birds. Consumers wanted turkeys of known origin grown locally, with more shoppers willing to pay a premium for them, he said.

The farm had recently won a two-star Great Taste award, which may also have contributed to the rise in sales, said Mr Lambert.

It had invested in a good website and may have benefited after two nearby farms recently ceased turkey production.

Attention to detail was important, said Mr Lambert. “We deliver when the customer wants us to and we invest in robust boxes, which cost more, but are worthwhile because they stay firm when they are put in the fridge or stacked seven high.”

However, Mr Lambert cautioned against excessive price rises. “We label and price for more of our customers,” he said.

This year, none of our butchers passed on the price rise I gave them. Christmas turkeys are not price sensitive, but if you consistently overprice, you will pay the penalty.”

Mr Lambert said he felt the “relentless rise” in sales of turkey butterfly joints had eased – although he acknowledged that this may be because Christmas 2016 fell at a weekend, which may have encouraged consumers to buy whole birds instead.

“Despite the huge numbers of turkey crowns and butterflies being sold, dry-cut birds are holding up well,” said Mr Lambert. “We feel the market for free-range dry-plucked bronze birds is growing.”

Margins were buoyed by keeping a rein on input costs. Starveall birds are reared on wholewheat from 18-19 weeks onwards to reduce the feeding bill. “For the second year in a row, we bought turkey feed at a good price,” said Mr Lambert.

However, he sounded a note of caution on the issue of seasonal workers.

Fewer people were available and Brexit meant overseas workers were less willing to come to the UK. “For the first time this year we found seasonal labour in short supply.”

Duncan Wreathall, of Forest Lodge Christmas Turkeys, said his family’s business had sold 6,500 birds to butchers and a further 700 birds direct to the public from the farm gate at Forest Lodge Farm, near Chelmsford, Essex.

Turkeys reared well this year, with below-average mortality, said Mr Wreathall. Birds had plucked average, but could have been cleaner, he added.

Staffing was “OK” this year, although the farm was considering a move to wax plucking to pre-empt any labour shortages.

“For the first time this year, bronze sales outnumbered whites at the farmgate,” said Mr Wreathall. Sales of whole birds to butchers were down, with crowns and turkey rolls up. There was also a trend towards further processing for farmgate sales.

“Labour is becoming an issue for us – we are concerned about whether we will get enough seasonal staff in the future.

There are fewer and fewer people about who want to work with turkeys in the run-up to Christmas. It felt a bit vulnerable this year.”

Ed Hurford, of Berkshire-based Copas Turkeys, said Brexit had shone a negative light on the UK for seasonal workers from overseas. “There is a definite feeling among them that they are not welcome – but we are of course trying to persuade them otherwise.”