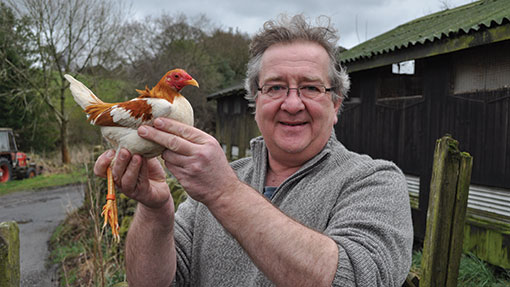 As part of our 140th anniversary coverage, Simon Wragg went to meet the president of the Poultry Club of Great Britain to find out how the showing scene has changed.

Like commercial poultry production, pure breed showing has been the subject of continuous amalgamation, with many village and town shows joining forces, or disappearing altogether.

But there’s still a deep-seated desire for competition, lively banter and the need to keep encouraging backyard keepers into the fancy, reflects Andrew Wetters, president of The Poultry Club of Great Britain.

At his home just outside New Mills in Derbyshire’s High Peak, commercial poultry have been a part of the 8ha farm business since the 1920s. “My grandmother, Hannah, had an egg round and we kept 2,000 hens, either free range or on deep litter,” he explains.

It sparked an interest in poultry keeping, albeit from fairly humble beginnings. “My first real investment came for the princely sum of £5, when I was taken to buy a trio of Exhibition Sussex bantams.”

The breed still appeals today, despite his divergence and subsequent reputation as a breeder of other types including Modern Game, Sussex, Wyandottes, Old English Game and Derbyshire Red Caps, to name a few. “I wouldn’t ever want to be without them,” he says emphatically of his foundation fancy.

His immersion into showing locally left an indelible mark. “We’re in a cotton valley here, so many village or town shows would go on until 7pm, allowing time for workers to exhibit after a mill shift ended. And that’s what’s really changed with time. So many events have gone, been lost, and we’ve had amalgamation into larger district shows.”

While he’s delighted that poultry keeping is on the rise once more, he mourns the passing of the small-scale show. “I don’t think young fanciers are mentored in the same way today. I was taken under the wing of exhibition showman Joe Cheetham Fiddler – a proper character – who could make as much of a bird as he could breed it.

“I progressed as the junior partner in a judging team and would be interrogated on the drive back as to why I’d stood the exhibits in a particular order. Joe would say ‘so long as you can justify your decision to yourself and the exhibitor, then you’ve done your job’.”

Prize monies have also followed the squeeze on poultry sector margins. With memories of “copper kettle” shows in Lancashire, Mr Wetters recalls one event where he took two category titles and best in show, coming home with just over £100. “I thought it was Christmas.”

Conversely, he suggests, poultry keepers are beginning to pay “realistic” sums for breeding stock. “It’s not a cheap hobby, particularly if you have large fowl, which is why bantams have seen such a rise in popularity,” he ventures.

The aim should always be to improve bloodlines and strains. “I prefer to have fewer birds, but with more eggs under them,” he explains.

But space – even on his former poultry farm – is limited. “I’m fortunate that I still have traditional Lancashire 12ft by 8ft sheds to house birds. But I’m still reliant on moving stock out to fields once the grass has been taken. Last year’s wet weather meant it was a real problem trying to keep grass on the ranges with many pens being moved weekly.”

The other issue is noise. Like modern poultry units, the impact of a backyard fancy on neighbours is increasingly hard to manage. “Perhaps, as a nation, we’re less tolerant,” he muses. “But a cock is still needed for breeding.”

He also regrets the loss of bloodlines through buyers’ poor vigilance of dog and fox attacks, and is wary of internet sales of pure breeds. “You can tell a lot more about a bird from looking at it in the feather than you can on screen,” he cautions.

That aside, poultry keeping retains an ubiquitous appeal. “It’s the fact you just never know what you’re going to get until the hatch. There’s always that desire to try a different line to correct a fault or improve a characteristic. It still has that element of chance and luck about it,” he says.

As to the future, Mr Wetters is hopeful the rise in backyard poultry keeping can be converted into more pure breed enthusiasts. Showing has given him a lifetime of enjoyment, and he’s still keen to “put the cat among the pigeons”, to spice up local competition and to keep the fancy very much alive when the time calls.