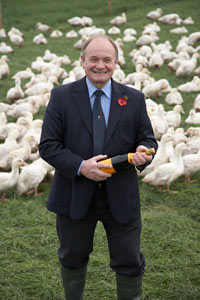 Lincolnshire firm Cherry Valley celebrated its 50th anniversary this month with the announcement of a record turnover year.

The major duck producer secured a £62m turnover in the last 12 months despite the economic downturn. This is £4 m up on 2008’s figure and is on the back of a number of developments during 2009, including the launch of its higher welfare Farm Fresh Duck brand.

Richard Bird, managing director at Cherry Valley, said: “It’s a fantastic achievement for the company to be celebrating its 50th year of business and the announcement of our record turnover just shows that half a century later we are still going strong, even in the current economic climate.

“This year we have launched our successful Farm Fresh Duck brand, secured major listings with Marks & Spencer and Tesco in the grocery sector, and our Chinese business remains buoyant, so we stand in good stead for the next 50 years.

“I have been with the company for 40 years having worked in almost every role, and I am immensely proud of all we have achieved and I am confident this success will continue.”

This year also saw Cherry Valley awarded a Freedom Food accreditation in recognition of the high standards of welfare throughout its farms. This is something the company has been committed to developing and perfecting over its 50 years.

Cherry Valley was founded in 1959 by the late Sir Joseph Nickerson near the village of Rothwell, which lies in a cherry tree-lined valley in the Lincolnshire Wolds.