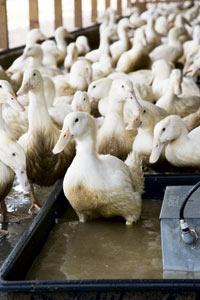 Giving indoor-reared ducks free access to open water is a contentious issue, but one company believes it has come up with a solution.

Animal welfare bodies have in recent years piled the pressure on retailers and the UK duck industry to give indoor-reared birds access to open water. But this in itself can lead to welfare and environmental problems, resulting from very wet litter.

Cherry Valley agricultural operations manager Brian Kenyon explains: “If you put open water troughs directly on to the straw litter, the birds make such a big mess inside, that it becomes unmanageable.

“We have tried drinkers positioned on plastic gridded areas, but we still had problems with smell and general hygiene. So we thought, why not take it outside and away from the main resting area and enclose it with a solid roof and wire mesh sides.”

So after five years of research and development, Cherry Valley has come up with its new “Farm Fresh” system. “Birds have access to open water, daylight and fresh air in an area outside of the house while still being protected from predators and disease.”

The Cherry Valley veranda concept is modular. By adding one or more modules to a house the number of birds which have the resource available to them can be increased, each bird therefore has a specific allocation of veranda space. Located down one side of the rearing house the veranda provides a series of deep bathing troughs on a cleanable concrete surface with bird access to the house via a series of wide pop holes.

“It is a space for ducks to make as much mess as they like, a bit like an outdoor wet room, without compromising the rest of the house environment. They can get into the troughs and preen, dabble and paddle. They also get fresh air and sunshine, but without the risk posed by contact with wild birds and predators,” he says.

“Then each morning, you close the pop holes and wash down the concrete by tipping out the troughs. We designed it to be easily cleaned.”

Another key factor in maintaining hygiene is that the duck’s drinking water is kept separate, inside the buildings along with the feed. Typically, there is one line of feeders down one side of the building and a parallel row of drinkers down the other side with a drain below to take away water split by the birds.

The system has been installed on nine units, including one of Ivan McCallim’s nine rearing sheds on his duck unit near Newark. The unit houses 75,000 ducks which are reared in a nine-week cycle.

His manager, Paul Smith, is impressed with the new system. “They do use it a lot, particularly first thing in a morning when I am bedding down.

“I wasn’t 100% sure that it was a good idea when we first talked about it. But now I’m convinced it is the way to do it [rear ducks] and it is better for the birds.”

So has the veranda proved successful? At the time of Poultry World’s visit, Mr Kenyon highlighted that the straw bedding inside the building had remained dry.

As in all Cherry Valley’s rearing systems, birds are bedded every day by the spreading of clean wheat or barley straw . “The aim is to apply a layer of fresh clean straw on top of yesterdays muck and maintain drainage within the house and bird cleanliness,” says Mr Kenyon.

“Ducks get excited and dabble in the straw searching for grains and rummaging around.”

Mr Kenyon believes that the combination of good welfare, stock management and Cherry Valley’s own Pekin breed is the reason why they never see any feather pecking or any other aggression. In addition, there is no need for routine medication or vaccination in any of their systems.

Cherry Valley is now in the process of getting Freedom Food accreditation for its system, although Mr Kenyon adds that Freedom Foods have been active advisors from the start of the development of the system.

The secret to the success of a free-range duck system is having mobile buildings, as they can soon poach land.

Sold through Marks and Spencer, Cherry Valley’s free-range duck is reared using its unique system that has evolved over the last 20 years.

Ducks are reared to 49 days, as required under EU rules, and have 24-hour access to the range with electric fencing around each pen. They are killed at a slaughter weight of 3.4kg liveweight, which roughly equates to 2.2kg oven-ready carcass. 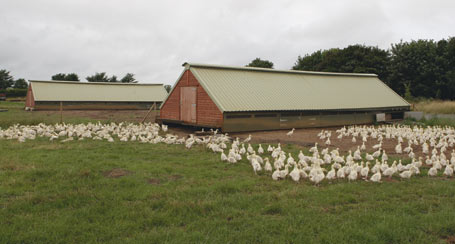 As the company’s agricultural operations manager Brian Kenyon points out, the biggest challenge rearing ducks is range water management and keeping the range in good condition.

One factor that helps keep ranges in good condition is by allowing them to remain fallow for a five-week period after each batch.

Robert Borrill, one of Cherry Valley’s newest free-range producers in north Lincolnshire, is successfully managing to maintain grass cover despite the poor summer weather. “Grass seems to recover well in the fallow period.”

He started out September last year installing eight sheds, each housing 650 birds. Sheds are in pairs, each pair sharing a range area.

However, Mr Borrill is no stranger to duck rearing having diversified into intensive rearing back in 1987, bringing livestock back on to the farm and now has 45,000 birds.

“Last year, I decided to try a new thing. I like trying new things,” he says.

Inside each free-range house is a box feeder which is topped up every five days, so cutting down on labour and avoids the need for power. Houses also contain drinkers. The houses are designed and operated so that in the event of DEFRA restrictions relating to say a national disease outbreak like avian influenza, the birds can be kept inside without compromising their welfare, says Mr Kenyon.

Birds arrive at three weeks of age, as the company has a specialist brooder unit. Birds are stocked at less than 25kg/sq m in the building with an external density of 2sq m/bird of grass and it has to be grass, as specified by the EU rules.

Birds are fed a natural wheat/soya based ration and the same ration is fed throughout. “Our business philosophy is to keep it simple,” says Mr Kenyon.

But he added that they may consider simple whole-wheat feeding as growth rate is not an issue and birds are sometimes on the heavy side at the end of the 49 day rearing period. .

Birds are bedded up every day with wheat or barley straw, which comes from Mr Borrill’s 1500-acre arable enterprise

He added that the arable side has benefitted significantly from using as a fertiliser. “Last year, I didn’t have to buy any potash or phosphate for my sugar beet crop – a big financial saving.”