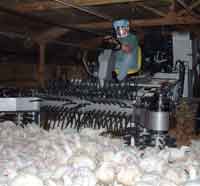 The Farm Animal Welfare Council is set to publish a major report this spring looking at the welfare of the whole slaughtering process, which is expected to bring the spotlight on current practices.

Members of a FAWC working group have spent the past few months visiting plants, reviewing scientific papers and seeking expert advice. They have looked at all processes, including catching and transport.

However, one company believes it already has a low-stress solution based on reducing human contact throughout the whole process from farm to stunning. But so far, mainly overseas producers have been using the system with one UK poultry catching company in Lincolnshire recently signing up to the system.

A complete live handling system from bird catching through to processing has been designed and developed by poultry handling specialist Anglia Autoflow, Diss, and aims to enhance conditions for both the birds and poultry workers. It offers the additional benefit of saving time.

The first step in the slaughtering process is the gentle catching of live birds using the Easyload Harvester, instead of catchers manually carrying birds by their legs. Producers simply drive the harvester around their poultry shed. 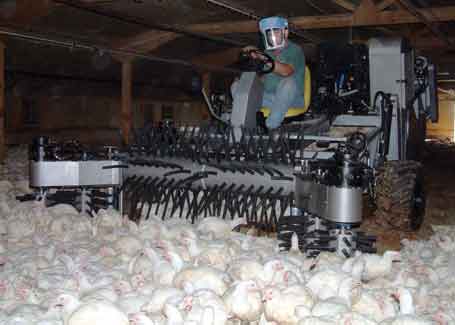 This catching machine moves around the shed and picks up 200 birds at a time in about 30 seconds. Once the machine is full it places the birds onto a hopper and returns to the shed to pick up another load, explains Barry Landymore sales director at Anglia Autoflow.

The machine is capable of catching up to 8000 birds an hour and can operate in either a clear span or posted shed, he says.

The catching machine is driven by one operator and it rules out the need for repetitive manual catching and there is no longer any human contact with the birds during the catch.

Mr Landymore explains: “As there is nobody touching the birds, you get a more consistent result. They [operators] don’t get as tired, as picking up chickens by hand is an exhausting job, so they perform better and can work for longer.

“From a welfare point of view, is it better for the bird because they are never picked up by the legs and carried upside down, as a result they tend to flap which can cause injuries. From trials we have performed, results show that leg damage is reduced by 38% and wing damage is 11% lower.

“Human welfare is also improved as the catcher driver can wear an air filtration mask to isolate them from the dust, compared with a manual catcher who would find a mask getting in the way of the job.”

Biosecurity is improved during the catch as there is no forklift going in and out of the sheds. Everything can be done outside the shed and this keeps the module frames cleaner and minimises the risks of cross contamination, he explains.

A curtain is placed over the doorway to mask the light and keep birds calm. With manual catching, the forklift going in and out of the shed can let light in and the noise it makes disturbs the birds.

In contrast, the catching machine is set at constant revs, so the engine remains at the same level at all times allowing the birds to quickly get accustomed to it, he adds.

How are birds transported?

Once the catcher is full the birds are placed on a hopper which carefully transfers them on to a packing unit.

The packing unit automatically counts the birds and places them into Easyload drawers and modules which are loaded onto the lorry and taken to the processing unit.

According to Anglia Autoflow this operation takes just two men, one to unload the empty drawers and reload the full drawers, plus a trailer operator.

What happens at the plant?

Drawers are unloaded from the transportation modules and automatically lowered into the CAS system which to comply with UK regulations contains a mixture of nitrogen and either carbon dioxide or argon. The drawers pass through the system in under two minutes.

Mr Landymore explains that the firm has developed a two stage carbon dioxide system with the first stage using a maximum of 30% carbon dioxide to provide the best bird welfare and gently make the bird unconscious, this lasts for up to a minute. Once the birds have been through this stage the carbon dioxide gradually increases for the second stage and eventually you end up with 70% carbon dioxide, from this point the bird is dead, says Mr Landymore.

“As well as improving bird welfare there are also benefits for the operators as hanging lifeless birds improves the working environment by reducing noise and dust problems.”

Birds stay in the drawers all the way through the gas stunner until they are dead and are then hung on the line. The stress is, therefore, as low as it can be, says Mr Landymore.

The system is fully automatic the drawers are pushed gently onto a conveyer with a lid over the top and into the gas stunning enclosure. In the UK, this has to operate to current legislation based on research carried out by the University of Bristol, he says.

“Most systems in the UK now use either nitrogen and carbon dioxide or nitrogen and argon. Nitrogen based mixtures mean much cheaper running costs,” he adds.

Does it affect product quality?

“You get a better quality product because with gas stunning, the carcass is relaxed. Stress is directly linked to quality, because the birds stay in the drawer and they don’t really know what is happening to them.

“The birds come out with the lowest possible stress levels and you get the best possible meat quality. It comes more cleanly off the carcass and there is a yield benefit of about 1.5%.

“Bleeding is also better because the carcass is relaxed and colour in the breast meat is more consistent,” says Mr Landymore.

What about dead on arrivals?

It is easy to spot dead on arrivals (DOA), as they will either be stiff due to rigor mortise or the temperature of the bird will be different and cooler than all the rest. If a DOA happens to be hung on the line, it doesn’t bleed or pluck well and is, therefore, easy to identify, explains Mr Landymore.