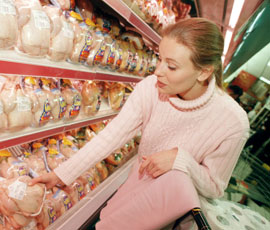 New British Poultry Council analysis has revealed that the price of poultry has risen by an average of 1.5% a year over the past two decades, half that of other foods.

The research was undertaken to mark the retirement of BPC chief executive Peter Bradnock, who has spent 20 years in the role. He said during his time in office the sector had changed dramatically. “It is a dynamic and fast-paced modern food industry committed to improving efficiency throughout the production process.”

Data provider Timetric researched the retail price index for 35 different food categories to compare how the price of poultrymeat had fared against other foodstuffs during the past 20 years.

The relatively lower price increases for chicken were put down to the consolidation of the industry. “In 1993, more than 20 companies contributed 90% of poultry production in the UK, down to five companies in 2013.

“In recent years, frozen poultry production has fallen from 50% of total sales to 15%. The quantity of chicken consumed, as a percentage of all meat in the UK, has increased from 34% to 44% over this period. And 49% of all meat now consumed in the UK is from the poultry sector.”

Mr Bradnock will be succeeded by Andrew Large, who joins the BPC after six years as chief executive of the Cleaning and Support Services Association.