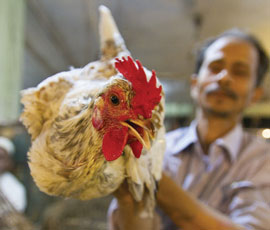 Scientists from the Chinese Centre for Disease Control have published the strongest evidence yet that closing China’s live poultry markets curtails the spread of avian influenza.

The study analysed the H7N9 outbreak in four Chinese cities earlier this year. It found closing poultry markets resulted in the rate of nearby human infections dropping 97-99%.

Across eastern Asia, birds are bought and sold live and killed by the consumer before cooking. This is seen as a way of guaranteeing fresh, safe meat.

“Without this robust evidence, policymakers would struggle to justify further closures of live poultry markets because of the millennia-old culture of trading live birds and the potential huge economic loss on the poultry industry in China.”

It is estimated the closure of bird markets this year cost the Chinese poultry industry up to £5bn.

The H7N9 outbreak, at the beginning of April this year, resulted in the closure of 780 live poultry markets in the cities of Shanghai, Hangzhou, Huzuo and Nanjing, as well as the suspension of the pet bird trade.

Researchers collected the age, sex, location, residence and date of illness onset from every laboratory-confirmed case of H7N9 infection. This allowed them to determine the before and after effect on poultry market closure.

The paper recommends “sustained” closure of live poultry markets in areas at high risk of disease spread, and their immediate closure in the area where infection is concerned.

A separate study undertaken by the Royal Veterinary College earlier this year said bird markets could become a “permanent” source of human infection, and recommended interventions such as daily disinfection of trading areas, vehicles and equipment.