All chicken are likely to be exposed to coccidiosis at some point, with young broilers particularly prone to infection. But what is its real impact on profit and which is the best approach to combat its effects? An online model developed by the University of Reading enables producers to weigh up the costs and benefits of different types of treatment, allowing them to choose the best financial solution for their flock.

It is the first phase of the £250,000 DEFRA-funded Farm Health Planning Project, which works across the industry to develop cost-benefit models to help producers tackle common livestock diseases in the most cost-effective way.

“Wherever you find chickens you will find coccidiosis,” says Daniel Parker, a poultry vet at Slatehall Veterinary Practice in Cambridgeshire, who helped to develop the model. “It will affect all types of chickens, but tends to be a problem with younger birds, usually peaking at 28 days in broilers.”

“There are two ways to prevent coccidiosis, including a coccidiostat in the feed to inhibit development of the bacteria or vaccinating.” Treatment is possible, but rarely a commercial option in broiler flocks.

Coccidiosis is estimated to cost the industry more than £42m a year, so opting for the most cost-effective treatment is likely to save individual producers a significant amount of money, says Reading University research assistant Isobel McClement. 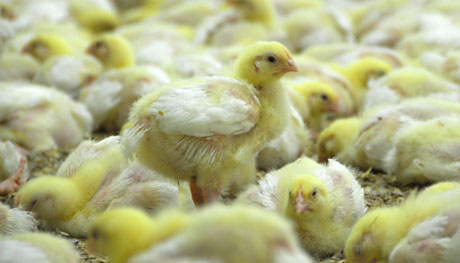 There are two ways to prevent coccidiosis in chickens: A coccidiostat in the feed or vaccinating

The web-based model enables producers, vets and consultants to input farm-specific data such as feed, chick and broiler prices, growth rates, veterinary costs and mortality. They can then compare the costs and benefits of vaccination versus coccidiostats or a combination of the two, for each type of coccidiosis species. It can be tailored for standard or free-range broilers with a variety of rearing periods.

Assuming infection with E Maxima on day 14 of a 35-day rearing period, a 40,000-bird broiler unit could lose about £5000 through poor feed conversion, slow live weight gain and mortality.

“Because the coccidiostats are cheaper than vaccination, the financial benefits are greater, even though the vaccine is more effective,” she says. “However, the model does not run over time, so only estimates the losses at a single point in time. It also does not take into account problems of resistance to coccidiostats often rotating a vaccine with coccidiostats helps combat resistance to the in-feed products.”

Results will obviously vary according to rearing systems, broiler meat prices and the type and time of infection, so each producer will find a different solution to suit them best.

“This model quantifies the costs of coccidiosis in broiler birds and helps farmers to examine the benefits of different treatments in their individual situations,” says Miss McClement. “The model is there to generate dialogue and awareness of disease costs between the vet and their client. The information can then be used to support the decision-making process, not replace the decision maker.”