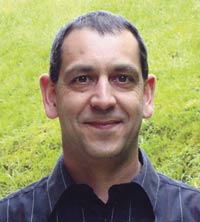 Documenting information is a fact of life for egg producers, with the daily monitoring of egg production and mortality essential to comply with the various welfare regulations.

However, writing out charts and marking up graphs by hand is a laborious process that can get brushed aside in favour of seemingly more important tasks.

With margins being squeezed at every level, reviewing flock performance is becoming increasingly important to ensure production remains profitable in tough times. To help with this task, customers of HST Feeds are reaping the benefits of using a computerised recording system.

Stuart Hinchly of HST Feeds has developed a computer program with flexibility at its heart. “You just tell me the information you want to be included and we can tailor the program to suit, making it unlike other flock recording programs,” he says.

Mr Hinchly visits his feed customers once a month to check on a flock’s progress and, by inputting data into the program regularly, he can provide useful information in chart and graph form to illustrate how each flock is performing.

Using the data from previous flocks, he can then provide his customers with forecasts, inputting egg prices and expected egg weights.

“The results are useful for analysing the performance of a flock against the forecast and even for identifying any potential problems before they arise,” says Mr Hinchly. “The figures also provide a benchmark against which to analyse successive flocks and this can help to improve business productivity.

“In the past, customers have used the figures positively to assess potential expansion plans and illustrate to bank managers that their farm is viable.”

Mr Hinchly adds: “One factor to note is recording egg sales at the farmgate, which is often ignored. But our data shows they can contribute substantially to the financial position of the flock, being worth thousands of pounds. For example, we have seen two extremes, with a producer who sold 2500 dozen at only one to five dozen a day at the farmgate for £3800 to 66 weeks of age, and another, who grades a few, has sold from a flock that is only 30 weeks old 2700 dozen for £3300.

“It really mounts up.”

Benchmarking is particularly valuable for the cage sector. Pete Dillow, a Shropshire cage egg producer with two flocks housed using different systems, says: “With margins so tight in the cage sector, egg size is extremely important for me, so I like to use the figures to adjust the feed accordingly. This makes sure I am supplying the birds with exactly the right amount they need.”

Mr Dillow likes to be able to compare how the flocks in the two systems – one belt, one deep pit – are performing.

“I like to be able to look back over the records of previous flocks and see how, for example, the current birds are performing in a particular week by comparison,” he says.

“The graphs are really useful for that. It’s much easier to identify potential problems and maybe the causes. But, above all, the forecasts give us something to aim for.” 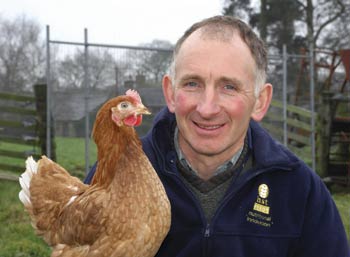 Alan Dickinson has been a free-range producer for four years on a mixed farm in Penrith, Cumbria. His current flock of 16,000 Goldlines are 20 weeks old. He uses computerised flock records to help with cashflow.

“I find both the forecasts and actual figures an invaluable tool,” says Mr Dickinson. “I’m no longer wondering how I’m doing – I know how I’m doing.

“Prior to using the computer-generated information, I never had any costings. I would work out the margins at the end of a flock by hand.

“But now I can see exactly at what point a flock is going to become profitable and, consequently, the information helps with cashflow.”

He adds: “I can show the forecast to my bank manager and we can see in advance when and why I may need extra finance.”

With 6000 Bovans Goldlines introduced as a free-range flock into an existing farm business, Michael Gerrard needed targets and an indication of how his flock performed compared with overall industry standards. Mr Hinchly was able to supply him with the information.

“My free-range enterprise is run as a separate entity to the remainder of the farm, so it’s important for us to see exactly how profitable the business is,” says Mr Gerrard.

“When we set up, I needed to justify to the bank our need for a loan. We used the forecasts Mr Hinchly supplied us with for this purpose.

“Now that we’re thinking of expanding, I can return to the bank with our actual figures and prove that the business is viable.”