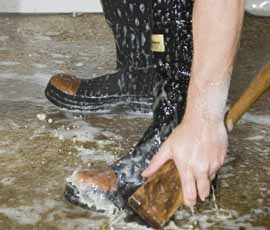 Poultry producers have been asked to give their feedback on proposed changes to the Red Tractor Poultry Scheme (formerly Assured Chicken Production), planned for introduction in October 2011.

The changes come on top of a tightening of biosecurity controls already agreed for April, which include providing dedicated footwear and foot dips at access points and “biosecure” areas for visitors.

But, as part of the industry’s approach to tackling campylobacter contamination in chicken meat, further changes are now proposed. These would come into effect on 1 October, and relate largely to providing facilities for catchers and the compulsory disinfecting of vehicles and boots before coming onto and leaving a farm.

“We’ve been working with the Food Standards Agency, trying to tighten up on biosecurity to stop any campylobacter actually arriving on farms in the first place,” said a spokesperson for the Red Tractor scheme.

The new rules also mandate catchers have a “clean and tidy” break area on farm, and there is more specific guidance given for the storage and spreading of litter on land under the incoming nitrate-vulnerable zone regulations.

The consultation continues until 25 March.