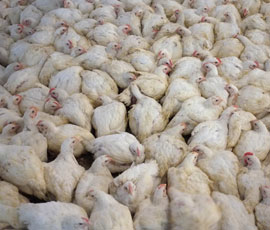 A poultry producer in Cornwall has claimed that his safety and that of his family were threatened when he applied to build three poultry units.

An application by Jamie Hatch of KB Products to construct the high welfare units in the village of Stoke Climsland was initially opposed by the local parish council, but instead of continuing with the application he withdrew it when he began to receive threats.

Now, following a show of support from others in the area, he has re-submitted his application.

In a letter to Cornwall Council, accompanying his new application and reproduced in local media, Mr Hatch stated: “If the disgraceful websites full of insinuations and veiled threats were not enough, I had to endure a vile poster campaign carried out under the cover of darkness by faceless cowards.

“It was the sinister events that threatened the safety of my family that made me withdraw my application.

“Never have I believed that my application was flawed, but I hoped that the disgusting behaviour of a small minority would stop if I withdrew my application because I was genuinely concerned for my wife and daughter’s safety.”

Mr Hatch said that, after being contacted by locals urging him not to give up, he had resubmitted his plans.

The application states that visual impact will be limited by three-metre hedges, and lorry movements will not average more than 1.3 per day, all after 8.00am.

But opponents say they can see no benefits to the village and surroundings of Stoke Climsland from the development.

“The vast number of supporters appear to be businesses associated with Mr Hatch and KB Products,” claims a campaign group website.

“None will be impacted themselves by this development, their lives will not be blighted by noise, traffic, smells and all the associated pollution that will accompany this project.”