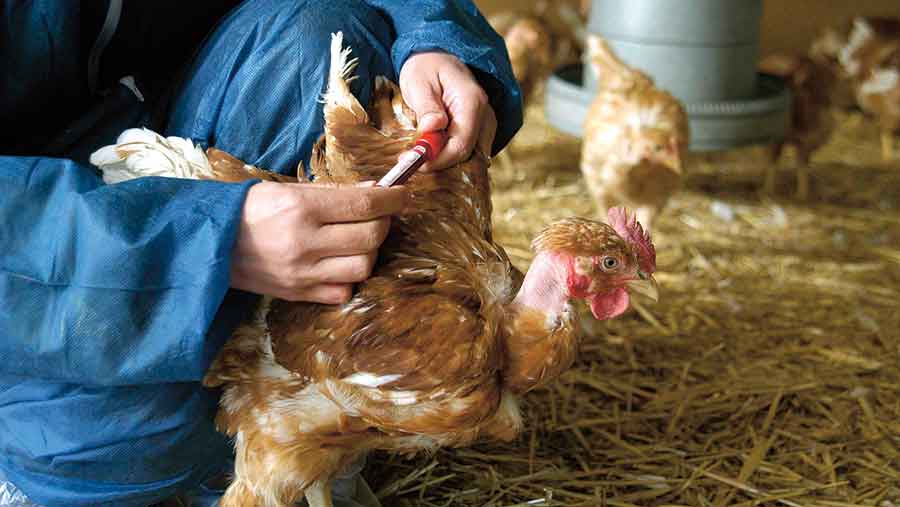 Each quarter Defra highlights emerging avian disease trends in a free-to-access report published on its website. It is a report worth receiving, and this latest update covers bird flu, wooden breast syndrome and unusual diseases emerging in broilers.

The disease was confirmed on a multi-age commercial broiler farm in Romania in April. The birds were reported to have been vaccinated three times with a live attenuated vaccine, but lack of biosecurity and incorrect vaccination procedures were considered to have contributed to the outbreak.

A second case followed shortly afterwards in another multi-age commercial broiler farm under the same ownership. The source of infection was considered to be wild birds.

Increasing numbers of enterococcal infections are being reported. Infections can be associated with a range of clinical signs and disease presentations, including septicaemia and septic joint, bone and tendon infections.

This condition has been recognised in the UK, elsewhere in Europe and in the USA over the past few years. It is recognised by the pale, firm appearance of the pectoral muscles (breast fillet) or broiler chickens in the processing plant. It is not associated with clinical problems in the birds while alive or with increased mortality.

It does, however, affect quality, resulting in downgrading of the affected muscle fillets in the processing plant, although it is not considered to have any human food safety implications.

The cause remains unknown but the pathogenesis may be related to increased body weight, increased growth rate and localised hypoxia. It may also be related to another newly recognised condition, white striping, and a score card has been produced by the Food Standards Agency too help identify and record the condition.

HPAI and LPAI outbreaks in Europe

In late April, H7N7 HPAI was confirmed as the cause of mortality and egg drop on an organic free-range egg farm housing 17,000 layers. It was most likely caused by a mutation from an LPAI strain.

H7N7 HPAI was subsequently confirmed in May on a 49,000-bird commercial turkey unit in the country.

There was also an H7N9 LPAI case confirmed in the Netherlands in June on a 47,000 free-range organic layer farm, which showed that the strain was not the same as the Asian H7N9 LPAI circulating in China, but was a distinct classical European lineage virus consistent with the large reservoir of unrelated viruses of multiple subtypes in European wild birds.

Up to 200 of 500, three-week-old goslings sourced as day-olds had to be culled after they showed leg stiffness progressing to loss of balance and dorsal recumbency within 24-36 hours.

Post-mortem examination revealed that the long bones, ribs and sternum were excessively soft and pliable and bent easily and the beak was also pliable.

Rickets is occasionally seen in young grown birds when there is an inadequate intake or uptake of phosphorus or calcium, imbalance of these two trace elements or deficiency of vitamin D. In this case, the birds had been fed ad lib on proprietary duck starter crumbs but no specific factor for the development of rickets was identified.

In another flock, 34 six-day-old goslings had died out of a batch of 250, delivered as day-olds. Post-mortem examination was undertaken on three birds – two of which had yolk sac infection while the third had yellow faecal material in the large intestine, suggestive of possible rotavirus infection.

Rotavirus is most commonly seen in gamebird chicks and turkey poults, in which it is a cause of enteritis and mortality, but it can affect a wide range of avian species, though rarely in goslings.

Several viruses have been implicated in Runting and Stunting Syndrome (RSS) in broiler chicks. Investigation of a problem of uneven growth and anorexia in 14-day old broiler chicks in the USA showed mild inflammatory changes in the small intestine and both rotavirus and coronavirus were detected on electron microscopy.