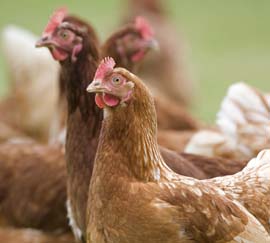 The growth of free-range egg production in the UK in recent decades has lead to a deterioration in the health of the nation’s commercial layer flock, with higher mortality, greater need for vaccination and less efficient production.

Addressing the World Poultry Science Association annual meeting in Nottingham, Barry Thorp, of the St David’s Poultry Team in Scotland, said a number of old diseases that had not been seen in the UK for decades, as well as new ones from Europe, were becoming endemic.

One example was Brachispira, which could lead to low-grade chronic colitis and lost production. Spotty liver, fowl coryza, erysipelothris and blackhead were also being seen increasingly in free-range systems.

The emergence of new and old diseases in the free-range sector also created a reservoir of infection, which could spread to caged layers, broilers and broiler breeders.

Free-range units were also less able to implement many of the biosecurity protocols that were applied to indoor production systems. Pathogens that could be removed by disinfection in the shed would continue to build up on the range.

“I’m not against free range, but it does lead to a build-up of pathogens that can compromise the ability to develop efficient egg production,” he told the meeting.

Dr Thorp said this was also associated with an increased dependence on vaccination.

Pullets were routinely vaccinated against Mareks disease, coccidiosis, Newcastle disease, infectious bronchitis, avian pneumovirus, egg drop syndrome, salmonella and mycoplasma. And there were numerous other vaccines that could be applied during the life of the hen.

Vaccines could themselves be a stressor – detrimental to bird welfare – and Dr Thorp said it was a research priority to improve both vaccines and delivery systems. He also called for the development of effective alternative remedies for specific health problems, with zero withdrawal times.

Dr Thorp explained that the modern laying hen was a highly efficient producer of animal protein, but was also susceptible to breakdown.

Particular problems related to cannibalism, smothering and bone fractures – though the latter was more down to problems associated with clearout and transport. “I open about a hundred chickens a week as a vet and I almost never see bone fractures. It’s not really a production-related problem.”

But feather and vent pecking continued to be a problem in some systems, especially in organic flocks, and Dr Thorp said there was a desperate need to find ways of preventing this.

* Got a view on this subject? Share it on the Poultry Platform