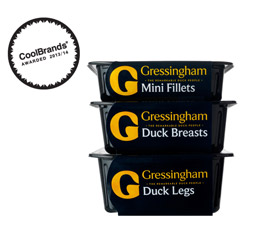 Duck processor Gressingham has joined the likes of Apple, Virgin Atlantic, Bollinger and John Lewis by being awarded “CoolBrand” status.

The firm owns the Gressingham duck breed – a cross between a wild mallard and a Pekin – which it takes from egg to slaughter before packaging for retail. It markets whole duck, as well as value-added cuts of leg and breast with pre-prepared sauces.

In the past few years Gressingham has invested heavily in its branding, launching product lines and a free recipe book that has been distributed to more than 400,000 customers. It has also focused on social media marketing.

A council of 37 “leading influencers”, including fashion designers and musicians, as well as 3,000 members of the public, chose Gressingham as an award winner. The process is independently overseen by The Centre For Brand Analysis.

Steve Curzon, associate marketing director at Gressingham, said it was a huge honour. “We’ve worked hard to encourage consumers to cook duck at home and are delighted that our efforts are paying off.”

Gressingham is the first meat producer to receive CoolBrand status.