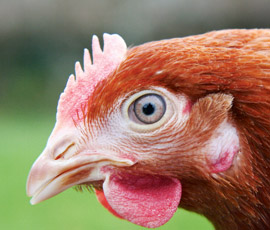 Beak trimming is to be banned in the Netherlands from 2018, three years earlier than originally planned, due to pressure from political groups.

Minister for Agriculture Sharon Dijksma announced that two parliamentary groups had asked for the ban to be brought forward as a sign of commitment to ending the practice.

The technique is similar to that in the UK – which is also facing a ban – where one-day-old chicks are treated with an infrared beam, which causes the sharp tip of the beak to fall off around 10 days later, preventing the worst of injurious feather-pecking in flocks of layers.

A spokesman for the Dutch ministry of agriculture said that trials had shown enrichment measures could prevent feather pecking without beak trimming. “We will introduce distractions for chickens, and breeding more social chickens to minimise feather pecking.

“The sector needs time to develop [these measures] and that’s why the ban will be introduced in 2018.”

The UK ban is due to kick in on 1 January 2016, and the Beak Trimming Action Group – a cross-industry panel of experts – is preparing a report to government that will outline if the ban can be introduced without compromising welfare. A number of UK industry bodies – and individual farmers – have warned that the proposed date for the ban is too soon.

Earlier this year, the British Egg Industry Council (BEIC) wrote to all MPs warning that hen welfare could be compromised. It pointed to the £1.02-1.19m cost to beak trim every hen in the UK, and said: “This is a cost that industry could do without. However not beak trimming can have considerable hen welfare and economic implications,”

Mark Williams, chief executive of the BEIC, noted that the Dutch minister was also pressing for an EU-wide ban. “It won’t help a country’s competitiveness if they take unilateral action,” he said. “If DEFRA push ahead it could be the same for the UK.”

Kelly Watson, chief poultry adviser for the NFU, expressed hope that the Dutch move would not influence DEFRA’s decision.

“This decision to bring the ban forward has been driven by politics and has not been science or evidence-based,” she said. “It is not even supported by the welfare organisations in the Netherlands at this point.

“We don’t want the UK industry to be forced down this road based purely on political pressure.

She added that the NFU’s position was that no ban should go forward unless there was confidence that, “the welfare of the birds won’t be compromised and we can ensure that farmers can continue to produce British eggs – we don’t want to be exporting our industry.

“This is about welfare, but also the economics and it’s about DEFRA supporting British farmers.”

For the latest on the impending beak-trim ban and other hot topics in the poultry industry, click here to subscribe