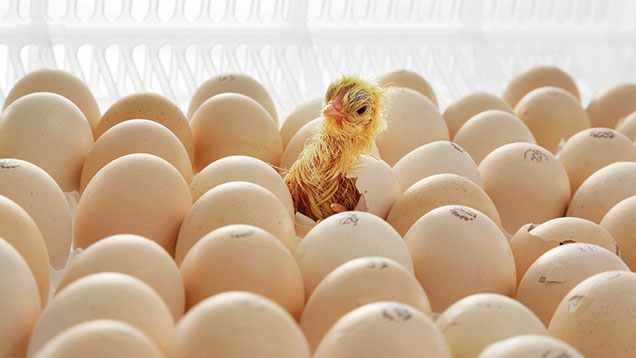 The quest for marginal improvements in broiler farming has moved even earlier than the first seven days of life, with one Dutch company looking to boost performance from point of hatch.

It’s a simple concept when explained. Incubated eggs sit in a hatching tray and the best birds start pipping first.

That early enthusiasm can be detrimental to their development, though, as they have to wait up to 36 hours for the rest of the eggs to hatch.

That’s a long time without food and water, according to Hatchtech’s marketing manager Erik Helmink.

The company has therefore developed a system which sets eggs above the crates, and gives them immediate access to feed and water once they hatch.

“When you look at a modern hatchery, the most important thing is that it supports the bird’s genetic potential,” he told Poultry World on a recent trip to the company’s headquarters in the Netherlands.

It makes the time spent inside the egg an ever-greater proportion of total development.

If you consider the life as beginning at the start of incubation, the period before hatch now accounts for 40% of a bird’s life, compared with 25% when growth rates were slower.

This was the ethos that the company’s founder, Tjitze Meter, had almost 20 years ago.

He worked for an established hatchery equipment company and grew frustrated that brand new kit in the 1990s would not outperform that from the 1960s.

So he set out to improve matters, and developed equipment that employed “laminar air flow”, or put simply, hatching units that could guarantee the same temperature at the floor of the hatcher as the roof.

Chicks gain from an immediate feed.

It was achieved by breaking the machine down into modules, each of which holds a stack of trays.

Between each stack is a radiator with evenly sized holes across its surface. Air is circulated around the system and sensors detect the temperature, adjusting the preceding panel accordingly.

The result, according to Mr Helmink, is uniform conditions throughout the unit.

One way to explain the importance of uniform temperature is to consider the effects of dehydration.

Place a newly hatched chick weighing 45.3g in a crate without feed and water for 24 hours at 40.3C and it will lose 6.4% of its body weight.

If that temperature rises to 41C, the water loss increases to 12.6%.

“Even in optimal conditions, dehydration is a risk.”

Inside the sound-proofed incubator.

With laminar air flows, every egg is exposed to the same conditions, variability is kept to a minimum, and the environment can be more readily controlled.

With the temperature uniform, the next area of focus was to shorten the time between the first bird emerging from the egg and the last – a window that can last 30 hours.

“It’s a natural process – not all the parent stock will be the same age, nor produce the same quality of eggs.”

Furthermore, different farms will have different storing times and the sheer logistics of gathering up to 100,000 eggs to be hatched means some will be older than others before entering the incubator.

The problem is exacerbated in countries like Russia, which imports a lot of its hatching eggs.

Egg condition will also vary – a problem that led to the development of the firm’s new system.

“The earliest bird to hatch faces a 72-hour wait to get feed or water,” says Mr Helmink, factoring in the time it takes to get from the hatchery and on to farm.

“It will survive because of the yolk sac, but it will not thrive.”

Chicks are still developing when they leave the egg, and the yolk sac is designed to “finish the process”, he adds, rather than to be used as sustenance. Not feeding “pauses” development for up to three days.

But company research has found clear and interesting benefits from providing access to feed and water immediately post-hatch.

“When you give a bird feed, their yolk uptake increases. The small intestine lengthens and villi develop faster, all improving nutrition absorption.”

So the system developed sees birds hatched above the crate which they then drop into.

This is more clinical, as the majority of egg shell remains in the set tray, away from birds.

As soon as they drop into the crate, feed and water is available.

A pelleted mix is provided by Hatchtech, that is cut to 2mm in length and has a reduced protein profile, as the yolk sac still provides much of this requirement.

Another characteristic of the new system is a focus on keeping external sounds out of the incubator.

“We know that chicks ‘call each other’ out of the egg, so we have focused on improving soundproofing.”

When the birds are ready to be taken from the hatching trays, there is no need to separate out egg shell, and the crates can be taken straight to farm.

The company is now monitoring the performance of one million birds a month, and has found that, while early indicators of performance are comparable with traditional hatching, it is at the slaughterhouse the difference becomes apparent.

“We wanted a clean and clear comparison between the two systems,” says Mr Helmink.

So far results have found little difference to liveability or seven-day bodyweight, but the trials suggest a 185g weight advantage to birds from its system at slaughter.

These benefits to growth equate to a 3c/chick (2.2p/chick) price advantage, according to the company’s calculations.

It is considering a lease scheme for the equipment that would cost around 1c (0.75p)  a bird.

That would include the feed and ongoing sales support, says Mr Helmink, who acknowledges it is a new concept that may take some time to become established.

The bottom line behind the project is, however, an ever earlier focus on getting the most from birds.

Traditionally, two methods have been employed to encourage birds to hatch closer together, in a bid to mitigate the time gap and so help with logistical planning.

The first, increasing the temperature, will “cook” the chicks out.

The second is to moderate the oxygen level of the hatching environment.

But both can be detrimental to chick development, says Mr Helmink.

Heating the eggs has been shown to increase chick size while stunting heart development, an unwelcome side effect.

Similar problems can be caused by restricting oxygen levels.

Birds that have been hatched in such a way will often have detectable signs – closed eyes being common, but not necessarily a symptom of a poor hatch. Red marking on the feet or the beak can be an indicator that the bird has forced its way out of the egg faster than it might have wanted to naturally.

The sign of chick quality is the navel – a poorly developed back end, indicates more bacteria, and possible future challenges to chick health.

Hatchtech has an eye on the UK poultry market simply because of the age of its hatching estate.

He says that many sites are nearing the time for an upgrade, and operate a multi-stage system, whereas much of Europe has already moved to hatching one large batch at a time.

This muti-stage approach, he likens to “dancing with trolleys”, introducing humans into the hatching process and inviting potential error.

“The biggest risk is the human interaction with the eggs – we are about removing that wherever possible.”

Another reason the UK is a target is the average age of hatcheries, and he notes that there are a number ready for a refresh.