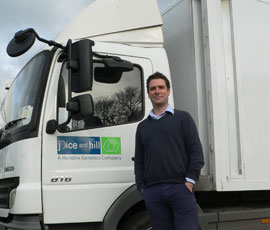 The Environment Agency (EA) has been criticised by a number of hatcheries, after they were sent letters which they claim is pressuring them into enforcing Integrated Pollution Prevention Control (IPPC) rules on farmers.

The EA sent letters to hatchery companies after producers voiced concerns some of them were being forced to take extra birds which was making them exceed their threshold.

But the move has been met with heavy criticism from hatcheries.

In the letter the EA warns hatcheries they could face prosecution if they supply more than 40,000 chicks to a site without a permit or supply chicks above a farm’s permitted number and insists the hatchery needs to obtain a copy of environmental permit to confirm allocation prior to stocking.

Nick Bailey of Joice and Hill hatchery said it was “an absolute farce” and he felt like they were being asked to police IPPC rules on behalf of the EA.

“It’s asking us to do the policing work for the EA and commercially it puts us in an uncomfortable position,” said Mr Bailey.

“We pride ourselves on our customer relations at Joice and Hill to ensure we are getting the best out of our chicks, but if customers think the information they are giving us could be used against them they won’t give us the information we need to do our job properly,” he explained.

Mr Bailey said it was impossible for them to know exactly how many birds a customer had on farm, as many took from multiple suppliers.

Although Mr Bailey said they hadn’t yet received a letter, he said he wouldn’t be asking his customers to divulge such information unless it was made a legal requirement.

But the EA has insisted the letter was merely meant to remind hatcheries of their obligations.

“The Environment Agency has received reports and found from our own investigations, occasions when farmers have been pressured to accept chick placements way in excess of their permit requirements,” said a spokesman from the EA.

The EA said the complaints led them to believe it was becoming “common practice” and they hoped the letter would clarify the rules.

“Its main purpose is to remind hatcheries of their obligations under the law not to pressure farmers to take numbers in excess of permit limits,” the spokesperson added.

Kelly Watson, the NFU’s chief poultry adviser confirmed she had received a number of complaints from hatcheries who had received the letter.

“The main issue is that hatcheries feel the EA is using third parties to enforce the rules on their behalf because it interrupts their relationship with customers,” Miss Watson said.

The NFU said they are now in the process of writing a letter to the EA to relay the concerns expressed by hatcheries.

Meanwhile the EA said it has spoken to the NFU, BEIC and BPC and would be happy to meet with hatcheries to discuss the matter further.