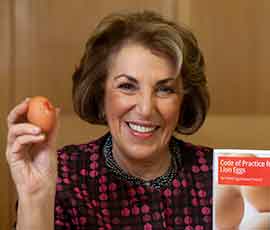 It is 25 years since the then junior health minister Edwina Currie made her infamous comments on ITN News about levels of salmonella in British eggs, comments that triggered a collapse in the market.  Philip Clarke asked her about her recollections of the era


You say that you never told people to stop eating eggs. But would you agree that telling 10m people on prime-time TV that “most egg production” was contaminated with salmonella was effectively the same thing?

No, I followed it up with clear advice to cook eggs properly. The earlier official recommendation to hospitals, care homes etc was to stop using shell eggs. Pasteurised liquid egg was regarded (then) as a much safer option.

You admit in your book that you made a slip of the tongue in your ITN interview. You said “most” when you wanted to say “much”. Do you think you were then made a scapegoat?


Yes, of course. Or rather, it was a case of “shoot the messenger”. It didn’t help anyone made ill by eating contaminated eggs, though – the numbers of confirmed cases continued to run at about 30,000 a year for the next decade, with about 60 deaths a year.

Was there really a problem with eggs? Wasn’t it more poor catering conditions that allowed minimal contamination levels to escalate into something much bigger?


There really was a problem with eggs. The hens’ oviducts had become contaminated with a new variant of salmonella, which did not kill the birds, but showed up in infected eggs, and caused a particularly virulent food poisoning in humans.

It resulted from laying stocks being fed “protein” that turned out to be ground-up dead chickens.

Similar insane feeding practices led to BSE in cattle in the 1980s and 90s. The best catering conditions in the world don’t eradicate the danger of raw or undercooked egg in these conditions. This is still true for chickenmeat, of course.


“We do warn people now that most of the egg production in this country, sadly, is now infected with salmonella” – Edwina Currie, speaking on ITN

Do you think the egg industry was in denial at the time?


Then, yes. Now, no. Now, they’re totally on the ball, and I am happy to say so. Lion mark eggs are fine.

Do you believe MAFF was deliberately obstructive in the run up to your comments in its dealings with the Department of Health?

MAFF were equivalent to a bunch of lunatics. They’d appointed themselves apologists for the farming industry – not their role, as public regulators and advisers. They were unscientific and incompetent.

They should have dealt with the problem speedily, as Sweden did. Instead they claimed there wasn’t a problem. They got themselves into exactly the same mess with BSE.

Why did you not issue an immediate retraction when you realised your mistake and saw its consequences?


I hadn’t made a mistake – not in the substance. I was public health minister. If something wasn’t done during the winter of 1988, I could foresee that we would have an epidemic on our hands in a hot summer – and fingers would be pointed at me. So I would rather be criticised for doing the right thing, not for silence in the face of wrong-doing.

Why did you resign two weeks later when you initially had the backing of the secretary of state and the prime minister?

I didn’t have their backing. Mrs Thatcher didn’t really believe we had a problem, and she was fearful of losing the rural vote.

Moreover, some of the voices whispering in her ear were in the pay of the tobacco industry. The Department of Health had had a very successful campaign to persuade people to give up smoking, so we were in their firing line – me especially.

Would you have done things differently with the wisdom of hindsight?

No. I’d have got the wording exactly right, but I’d still have wanted to issue an effective public warning. Perhaps I could have persuaded Ken Clarke, secretary of state at the time, to issue the warning instead, but I’d already tried that; he just didn’t think it was that important.

Have you ever apologised for the incident, or felt any need to?

How would you like to be remembered by the egg sector?

I get on very well with the British Egg Industry Council. They’re the ones who started the decontamination process in the late 1990s; it took until March 2004 before all tested eggs carrying the Lion stamp in the UK were free of contamination, and it has stayed that way ever since. They spent their own money, several millions, to do this, and deserve the credit. Their standards are very high.

And how would you like to be remembered as a politician?

I’m still a politician – actively commentating on the issues of the day, with more freedom now I’m not in Parliament itself. Would you like to know my (positive) views on HS2?

Robust. Egg sales have reached their highest levels this year since the late 1980s. Officially a superfood – ain’t that nice? Must also be benefitting hugely from the Great British Bake Off, or do we just watch others cook these days, I wonder?

Were you caught up in the ‘salmonella in eggs’ crisis? If so, what are your recollections? Share them below on Disqus or email poultry.world@rbi.co.uk