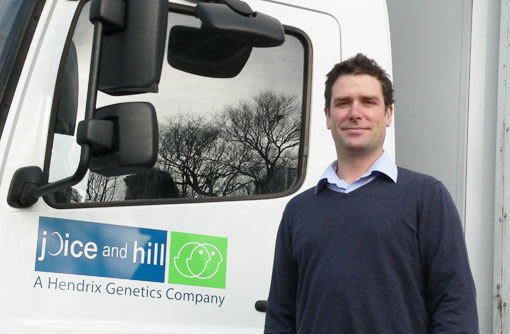 Creating a better balance between egg supply and demand will be one of the key challenges for the industry, according to Ivo Wetemans, area manager for north, west and central Europe at ISA – a subsidiary of Joice and Hill’s parent company Hendrix Genetics.

Addressing a recent Joice and Hill meeting in York, he predicted that the main importing countries across Europe, such as Germany, Austria and the UK, would move towards greater self-sufficiency in eggs, driven by consumer preference.

Meanwhile, the main exporting countries, such as The Netherlands, Poland and Spain, were likely to reduce bird numbers, as they struggled to raise enough money to invest in new housing systems, required by legislation from 2012.

But achieving a balance remained a challenge.

The over-supply situation in Europe had been caused by an increase in chick placings, which had risen from 310 million in 1999 to 340m in 2010, Mr Wetemans said.

Meanwhile, the main retailers, keen to keep food price rises to a minimum, had played this market to their advantage and kept a lid on prices. This was despite the fact that research had indicated that shoppers did not significantly change the number of eggs they bought routinely, following a price increase.

Given this evidence, the over-supply situation was the only factor that had prevented packers from recovering any of the substantial cost of production increases endured over the winter months.

Across the rest of Europe, the UK egg market was considered well organised, with strong, high-value brands, such as Happy Eggs. The Lion code also afforded UK producers a level of protection, he said.

“In Holland, for example, it is the supermarket own-brands that are given a favourable placing on the shelves. In the UK, the large retailers have a more flexible attitude towards high-value brands. They are not against allocating them a prominent place on the shelves, and have shown they are keen to work with the supplier, to boost sales.”

Joice and Hill managing director Nick Bailey (pictured) told the audience that global demand for food was predicted to double over the next 50 years, with 70% of the increase having to be achieved through greater production efficiency.

The poultry sector had an important role to play in meeting these requirements, and closer links throughout the production chain would help to attain this goal, he said.

As part of a global breeding company, Joice and Hill was well placed to explain to large retailers the practical limitations applying to the development of layer breeds to produce the type of eggs consumers were seeking, for example.

“We want to get closer to the market, so we can understand the areas we need to invest in for the future,” said Mr Bailey. “Breeding is a long-term business and there are limits to the progress that can be achieved by genetics alone. Better mutual understanding can lead to new opportunities and head off problem situations on sensitive consumer issues, such as beak treatment.”

Producers might also find it useful to have a breeding specialist present at meetings to tackle production problems and improve profitability, he suggested. This concept was already being trialled with around half-a-dozen of the company’s key accounts.

“Our role is not to dictate to the producer, but we are interested in working with vets and nutritionists, to reach an agreement about methods of managing flocks for maximum profitability,” he said.

Despite some initial reluctance to share information in this way, producers taking part in the scheme had found it beneficial, said Mr Bailey. The data would be used to enhance product support and contribute to a confidential database, covering flocks across Europe. The information would also be collated for benchmarking purposes.

“The ability to compare one flock’s performance against the average in a similar system can be very useful,” he commented. “It can also help us measure our progress on the traits that our customers identify as important.”

• France – 25% of production will be alternative systems, mostly free range, in time for the ban

• Italy – Aiming for self-sufficiency in eggs

• Germany – conventional cages were outlawed in 2010