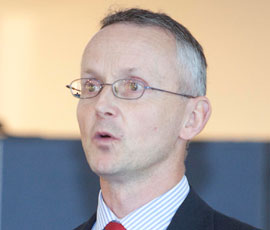 The UK egg market is heading towards a better balance, with the laying flock expected to be back down to 34m by the end of the year and demand continuing to grow.

Latest figures showed that egg purchasing increased by 1.6% in volume terms in 2010, and there had been a 0.6% year-on-year rise in the first three months of 2011, Britisg Egg Industry Council chief executive Mark Williams told a workshop at Pig and Poultry LIVE 2011.

There were also signs that continental egg production had peaked and EU prices were starting to rise again.

In the UK, free-range production had increased to 44% of the market so far this year, while the cage egg sector had dropped below 50% for the first time.

Mr Williams said that the free-range sector would continue to grow – despite the pressures of the economic downturn and food price inflation – and there would be increased product differentiation through branding.

“Retailers are driven by margin and they will make more margin on free range rather than cage eggs,” he said.

But he warned that competition among the supermarkets remained intense and getting a price rise could be difficult, while feed prices were set to remain firm.

There was also a threat from illegal egg imports post-2011. Mr Williams expected that the EU Commission would give non-compliant member states more time to convert to enriched cages. Even if it also introduced an intra-community trade ban, without a separate indentification code, the market would be vulnerable.

Mr Williams expressed concern at the lack of resource available to protect the UK’s borders. Powdered and liquid egg for processing represented a particular challenge.

Unofficial estimates suggest that 29% of EU hens would be in conventional cages in 2012, with Spain, Itlay and Poland all likely to be more than 50% non-compliant.

“I wish these figures were wrong,” said Mr Williams. “But no one, including the EU Commission, has been able to say they are rubbish.”

Mr Williams indicated that the EU Commission had more up-to-date figures on the level of compliance within member states, but was sitting on it, despite a formal industry request to see the data.