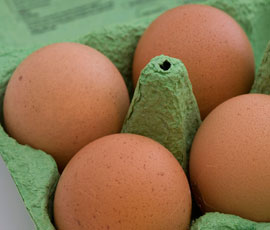 A Welsh free-range egg farmer has complained to an MEP about the unfair competition being faced by UK egg producers from EU countries failing to comply with the conventional cage ban.

“Those EU members states who have taken no action have resulted in the importation of EU battery caged hen eggs into the UK, leaving farmers at a financial disadvantage and unable to compete with the import of cheaper eggs into our supermarkets,” Mr Thomas told Ms Evans.

Since the Welfare of Laying Hens Directive came into force on 1 January this year, it has been confirmed that 12 EU countries have failed to comply with the legislation.

Bulgaria is now believed to be fully compliant, but the European Commission has yet to confirm this, and they are not prepared to provide details regarding the level of non-compliance in individual member states.

“Without the required stamp on every egg shell to state its origin, it is almost impossible to tell whether an egg in liquid form has been transported from a battery farm or free-range farm,” said Mr Thomas, vice chairman of the Farmers Union of Wales, Glamorganshire.

“As the UK, along with other EU countries, change their farming habits, it is inevitable these additional requirements will increase costs for compliant farmers, forcing them to compete against the cheaper egg products from non-compliant EU countries,” he added.