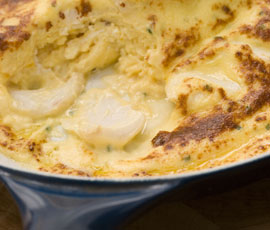 A new study by Leatherhead Food Research and published in The International Journal of Food Sciences and Nutrition, has shown that an egg-based lunch can help people feel fuller for longer when compared with other common lunches with similar calorie counts.

Previous studies by US researchers have shown that eating eggs for breakfast has a strong effect on satiety – the feeling of fullness after eating – but this is the first major piece of research in the UK on the benefits of eating eggs at lunchtime.

The new study compared the effects on appetite of three different lunches with the same calorie content: a two-egg omelette with bread and salad, versus a jacket potato with cheese and salad, or a chicken salad sandwich. The three options, each containing less than 350 calories in total, were considered to be typical “healthy choice” lunches.

A total of 31 people took part in the study over a three-week period, during which time each participant consumed each of the three meals on separate occasions after a standard breakfast of cereal with milk.

When subjects were asked how full they felt during the afternoon, the omelette proved significantly more satisfying than the jacket potato and there were some indications that the egg-based meal was more satiating and filling than the chicken sandwich.

Dr Carrie Ruxton, independent dietitian and obesity expert, commented: “Previous studies have shown that eating eggs for breakfast can increase satiety and help with weight loss, but many people don’t have time for a cooked breakfast. Now it seems that eating eggs at lunchtime has a similar effect on controlling appetite.

“Now that major heart health organisations have removed previous limits on egg consumption, due to research showing that dietary cholesterol is not an issue for heart health, there are more reasons than ever to eat eggs as part of a healthy diet.”

It is well established that different foods have different effects on satiety, with protein streets ahead of carbohydrate and fat in helping to promote satiety and control hunger, said a statement from the British Egg Information Service.

“Eggs are a key source of vitamins and minerals, with protein representing around 35% of the energy content of a typical egg.”