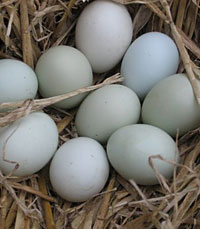 Specialist poultry breeder David Applegarth has launched a new company with sole responsibility for the breeding and production of the recently introduced Applegarth Skyline layer breed.

Northumberland firm Applegarth21 takes on production of the first British-bred blue egg-laying hybrid. Developed over the past few years, the bird is increasingly used in the specialist egg market, gaining a reputation for producing a premium egg, he said.

The breeder behind the initiative Mr Applegarth explained: “Co-operation between local poultry farmers, a poultry breeder and retailers has resulted in eggs from rare breeds of poultry being brought back to the British public.”

He maintained a group of rare utility poultry breeds for 21 years and has spent the past few years working to bring them back to commercial viability.

“They have many of the special attributes that were at one time deemed to be non-commercial. But with the revival of free-range and organic production, they are once again in demand,” he said.

“The Skyline has ancestry going back in a direct line to birds bred by Professor Punnett almost 100 years ago at the University of Cambridge.“

rivate breeders then maintained the pure lines after the university gave up its poultry breeding station in 1957, he added.