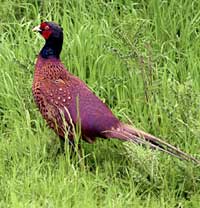 Elanco Animal Health has entered the game market with some new products, following the acquisition of Janssen Animal Health in 2010.

The company has added the wormers Flubenvet® 5% Premix and Flubenvet 2.5% Medicated Premixture to its portfolio, as well as the rebranded and reformulated Elanco Game Bird Tonic.

“A lot of keepers out there will be unfamiliar with the Elanco name, but we are very pleased to be able to provide products that help keep game birds healthy and free from disease,” said poultry key acccounts manager, Jon Sargent.

The new tonic can help improve the stature of the keepers’ birds, and boost egg weights, claims the company.

The formulation incorporates a natural antioxidant blend and a vitamin D3 metabolite, which has been shown to increase body weights in broilers and improve feed conversion by 2.6%. Bone strength was also improved by almost 10%, according to independent research.