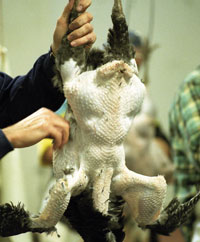 Euronews says EU agriculture ministers rejected the proposal and the French Agriculture Minister Michel Barnier said it had nothing to do with preventing competition. But there had been strong resistance to the lifting of the 10-year ban on chlorinated chicken imports.

US processors routinely treat chicken with chlorinated water to remove any bacteria, such as salmonella. But this practice is banned in the EU and, consequently, US imports have been banned for the last 10 years. The EU instead opts for reducing on-farm contamination.