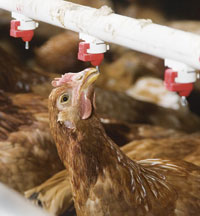 A new EU Directive aimed at controlling the spread of avian disease will require poultry producers to ear tag their birds, it was announced this week at the EU Commission.

Directive 2011/115/EC will force all farmers in member states to tag their birds with an EID device, similar to those used in cattle and sheep. Parliament is set to pass the directive into UK law by June.

“This agreement of avian tagging will be the EU’s most powerful weapon in combating disease and will ensure outbreaks of dangerous viruses in poultry no longer spread,” EU Commission representative Aloywishes Delgravin said.

Mr Delgravin said that he thought tagging would be a simple enough process for a qualified veterinarian.

“Any properly qualified vet would be able to easily and quickly find a chicken’s ear and tag it. After all, if they didn’t have ears then how would they hear anything?”

“Also, placing a large plastic tag on the ear might reduce feather pecking as the birds’ attention is attracted to the tag.”

“Nametags, definitely nametags, and perhaps lessons on cleanliness,” she suggested.

A DEFRA official, speaking on the condition of anonymity, said they were unsure how the regulation would affect farmers.

“But I’m not too fussed. My job’s gone in the cuts and really I’m just Googling my own name until the end of April.”