Since its launch by Prime Minister Tony Blair back in 2000, The Red Tractor logo has united the food chain in raising production standards and verifying that they are being met.

And in the nine years since then, it has emerged as the public face of food assurance giving consumers a single logo. Over 78,000 farmers and growers are now members of the scheme and The Red Tractor logo can be spotted on thousands of products such as beef, lamb, pork, milk, chicken and turkey.

The poultry side is covered by Assured Chicken Production (ACP) and back in December 2008, David Joll took over as the new chairman of the Poultry Sector Board.

It has been a busy 12 months with ACP incorporating the requirements of the EU broiler welfare directive, as well as seeing the launch of the Poultry Meat Training Initiative. He talks exclusively to Poultry World about the scheme and its future aspirations.

What proportion of British chicken and turkey is produced under the ACP scheme?

About 85% of all British chicken and over 90% of British turkey is produced under the scheme.

What have been the benefits of the scheme?

It has helped to provide the assurance that both poultry buyers and consumers seek. Prior to the scheme’s launch, the British consumer had been overwhelmed by food and farming scares and needed help and guidance to ensure that their purchases were safe and healthy.

What is the relationship between ACP and the Red Tractor?

Assured Food Standards (AFS), who administers the Red Tractor Scheme, has six “sectors” of which poultry is one. As the chairman of the Poultry Sector Board (ACP), I sit on the AFS Board, as does the British Poultry Council’s appointed nominee, Philip Wilkinson of the 2 Sisters Food Group.

I also sit on the Standards Committee of AFS. It is essential that AFS ensures consistency of standards across the different product sectors and this committee provides the forum for these cross sector technical discussions.

What is the role of the Poultry Sector Board?

The Poultry Sector Board is strongly supported by its Technical Advisory Committee (TAC), chaired by poultry scientist Peter Biggs. The Board and TAC are responsible for the ACP standards, their technical and scientific reviews, the management of the Certification Bodies, appraising reports including information on non-conformances against standards and certification detail. They also liaise with other groups, such as the RSPCA,Farm Animal Welfare Council and a number of research bodies.

The Poultry Sector Board and the TAC have also been instrumental in the development and implementation of the new Poultry Meat Training Initiative.

Finally, we regularly liaise with DEFRA, the Food Standards Agency and the Veterinary Medicines Directorate and we are currently examining widening the role of the Certification Bodies to assist Government Agencies.

How is if funded?

The Poultry Sector Board is funded by contributions from members of the assurance scheme.

How is ACP being promoted to consumers?

ACP has no remit or funds for consumer promotion of the Red Tractor logo, which is now carried on over £8bn worth of products.

The new Agriculture and Horticulture Development Board (AHDB) is looking at investing in the Red Tractor logo to become the single logo on food. What implications will this have on ACP?

I believe the AHDB funding will have a significant effect on the future use of the Red Tractor logo in the appropriate sectors. The AHDB has considerable funds, effective marketing experience and a real determination to market quality British food products well. In that they will be using The Red Tractor logo is bound to have a beneficial effect on all users of the logo.

Poultry is, however, not one of the sectors covered by AHDB and separate discussions are proceeding with the industry on pro-rata funding. 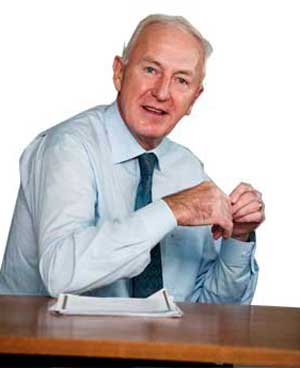 What are the top three non-compliances and what tips can you offer to help producers avoid these?

Obviously this does vary but, as a general rule, the three main non-compliances are temperature records and monitoring at the poultry house, access to two feed bins and that water systems should be alarmed.

Clearly some of these require investment which is never easy. But with the answers I have given as to the benefits of The Red Tractor logo, I think it will be worthwhile.

With training records no longer in the top three, does that mean the Poultry Passport scheme has been a success?

Yes it was a non-compliance in the past. The Poultry Passport Scheme is a great success and the TAC is rightly proud of supporting this initiative. There are now over 2000 poultry workers trained and in receipt of their passports. This remains our number one priority – to ensure good livestock welfare.

Welfare receives a lot of media attention. Is there a danger that this emphasis overshadows other benefits of ACP such as traceability?

It is not possible to over emphasise the importance of bird welfare. Not only is it morally right to do so, but it leads to better flock performance and product quality. However, as I said earlier, our policy and belief at ACP is that the holistic approach is the right one. Food safety, traceability and biosecurity are also all of critical importance.

The UK poultry industry has demonstrated its responsible attitude and ability by working with the authorities on a number of issues. For example, it has dramatically reduced the number of salmonella positives in the UK.

The media and other schemes portray ACP as the base standard for welfare. How can the sector convince the media that it goes much further than the legal minimum?

The answer must lie in education, information and liaison. An often ignored fact is that ACP standards extend beyond broiler production and cover free-range, as well as breeder layers, breeder replacements and hatchery production.

We accept that we are in a position of high responsibility and part of that responsibility is to explain what we do, what we believe in, but also to listen to other peoples’ points of view. The TAC annually reviews all the standards and, in so doing, invites comments from welfare organisations and others. We have attended a number of meetings over the past few months where we have explained to many welfare organisations what ACP stands for. That it is not a “base” scheme at all.

It is important to understand that welfare is a complex multi-factorial issue and that it is not simply a reflection of a production system. There is a tendency to oversimplify the issue, such as good welfare equals low stocking density or access to free range. ACP maintains that good stockmanship is of paramount importance in achieving good welfare

The ACP scheme has provided what the majority view demanded. It provides quality products from livestock raised in a safe, humane and responsible way that is wholesome and good to eat and is produced in sufficient quantities to be viable and market satisfying.

The ACP scheme is ahead, both in time and scope, of legislation and will continue to be under review. The ACP Board will continue to take a responsible view – welfare, food safety, biosecurity, practicability and viability.

One example of going beyond the legal minimum is a new requirement for producers to investigate additional forms of environmental enrichment for chickens. How far do you see the bar continuing to rise over the next 10 years?

The TAC is currently considering forms of environmental enrichment that may not be science-based, but do assist “quality of life” while bearing in mind they that any measures must be safe and not adversely affect biosecurity.

The UK poultry industry has, in my view, led the world in terms of welfare, product development, quality and nutrition for over half a century. I believe this will continue.

How do you see the scheme developing in the future? Could green credentials (carbon footprints) or animal welfare labelling become part of the scheme?

I think the scheme has developed significantly since 2000 and, although there will always be limits, will continue to do so. Staff training, as demonstrated by the Poultry Meat Training Initiative, is an example of where there will be more progress. Environmental controls will be another.

As far as “green” credentials are concerned, I believe ACP is already demonstrating its responsible and “green” attitude. There has been ongoing project work with the Environment Agency, for example, to assist in its implementation of the Integrated Pollution Prevention and Control Directive. The ACP Standards cover many “green” issues.

Earlier, I referred to our regular liaison with DEFRA, the Veterinary Medicines Directorate and the Food Standards Agency. I see the scheme working ever more closely with government agencies to provide a comprehensive farm inspection service which would, and probably should, cover all aspects including “green” ones.