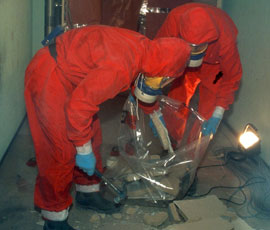 The dangers of working with asbestos in old-style poultry units has been revealed in a court settlement (14 May) involving a Lincolnshire company.

The High Court in London was told that Malcolm Roberts had worked for 30 years for GW Padley Poultry, in Grantham, where as part of his duties he repaired chicken coops made partly out of asbestos.

Following his retirement in 1998, he developed mesothelioma – a rare type of cancer that occurs in the tissues covering the lungs or the abdomen.

His family then launched an action against the company. This has now resulted in High Court settlement, with GW Padley agreeing to pay Mr Roberts’ family a total of £152,000.

The money will be used to pay for care for his elderly widow.

The settlement was a voluntary agreement and there was no suggestion that GW Padley were aware at the time of the dangers presented by asbestos.