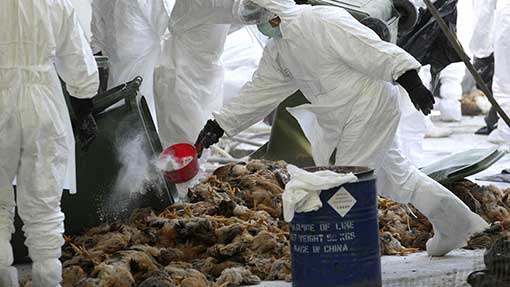 A new strain of avian influenza virus in poultry in south-east Asia represents a serious threat to animal health and livelihoods in the region, and must be closely monitored, the UN’s Food and Agriculture Organisation (FAO) has warned.

Chinese authorities first reported the high pathogenic H5N6 strain in April 2014, but it has since spread to other countries in the region.

The most recent outbreak was on a poultry farm in the Quang Ngai province of eastern Vietnam, where birds suffered 30% mortality.

“Influenza viruses are constantly mixing and recombining to form new threats,” said FAO’s chief veterinary officer Juan Lubroth. “However, H5N6 is particularly worrisome, since it has been detected in several places so far from one another. Because it is so highly pathogenic, infected poultry quickly become sick and death rates are very high.”

The World Organisation for Animal Health (OIE) is also monitoring the situation closely.

“Effective surveillance and early detection of animal disease at source are two main keys to reduce the risk of dissemination and to ensure safe trade,” said OIE director general Bernard Vallat, who called on all 180 member countries to give immediate notification of any outbreaks.

So far, only one case of H5N6 has been reported in humans after contact with poultry in China. The person later died.

Last year, China was the centre of another major AI outbreak, involving the H7N9 strain. While this was low pathogenic in poultry, it proved highly virulent in humans, with deaths running into double figures. The outbreak cost the Chinese poultry sector more than US$5bn.