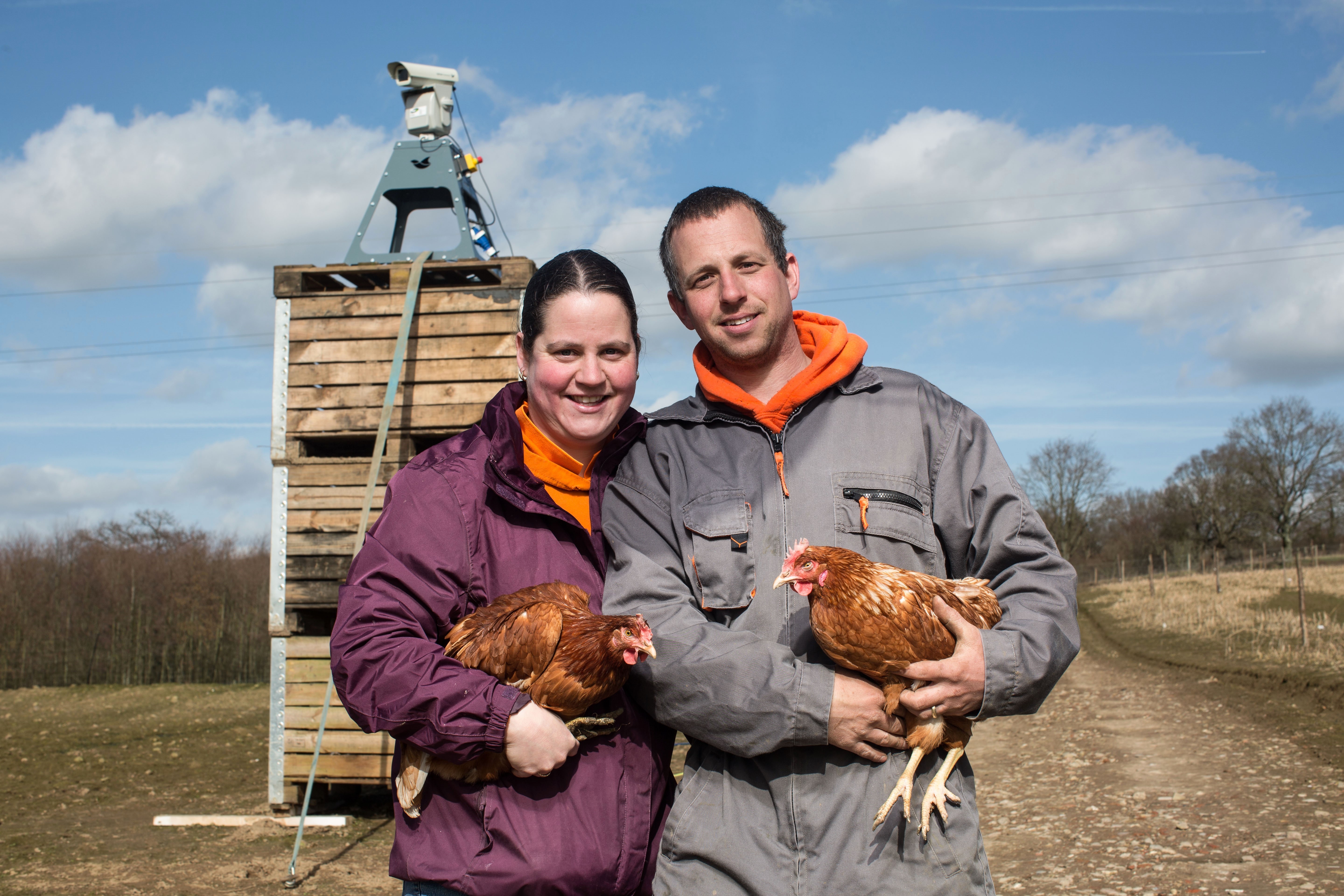 Farm uses lasers to guard its hens from Bird Flu.

Orchard Eggs, based in West Sussex, has taken advantage of the latest laser technology available from a Dutch company in order to scare off wild migratory birds and prevent them mixing with the farm’s chickens.

As the British government recently extended the avian influenza (bird flu) prevention zone to April 2017, it also raised the biosecurity requirements poultry farmers must adhere to if they want to keep their birds outdoors.

Orchard Eggs, owned by young Dutch couple Karen and Daniel Hoeberichts, said once it heard of the new laser technology steps were taken to set it up to complement the farm’s other biosecurity measures.

At Orchard Eggs the hens roam freely around 50 acres of orchards and have access to moveable houses within the grounds when they need it.

According to the developers, the principle of repelling birds with a laser beam is inspired by nature. The birds think the approaching laser beam is a physical object, thus they go into survival mode and fly away.

Daniel Hoeberichts said: “Our birds are housed across 50 acres of orchard and we want to do everything to keep them safe from infection.

“Once we heard about the Agrilaser Autonomic it seemed like an ideal solution to complement all of our other biosecurity measures.”

The automated laser is an innovative method of repelling unwanted birds without causing harm to the wild birds, the chickens and the surrounding environment.

The system has been developed by the Dutch company, Bird Control Group, in cooperation with the Technical University of Delft in The Netherlands.

The laser is silent and shows effectiveness of 90%-100% in bird dispersal at farms, which the company says makes it a viable alternative to the expensive method of installing nets all around the entire poultry farm.

Dan England, director of distributors PestFix (UK) said: “The outbreak of avian influenza here in the UK back in December 2016 has caused untold stress to the poultry and egg sector.

“The advent of new APHA (Animal & Plant Health Authority) protocol allows free range birds outdoors, if they can be kept segregated from wild birds. With this rule, the laser technology for bird dispersal comes into its own. Because they are domesticated, the hens are unaffected by the laser.”

The UK set up the prevention zone from December 6 2016 which meant that all poultry and captive bird keepers had to apply heightened biosecurity including keeping their birds indoors if possible, or otherwise separated from wild birds.

This was renewed on January 4 2017 to last until February 28. This further zone will remain in force until at least the end of April 2017.

British Free Range Egg Producers Association (BFREPA) chief executive Robert Gooch said: “BFREPA members are proud to produce a product which so many consumers love and they very much want their hens to have access to the outside.

“However there is still a significant risk that free range flocks could catch avian influenza while migratory wild birds are in the country in significant numbers.

“It’s important that consumers understand that this is not a food safety scare. Eggs remain a fantastic source of nutrition and are safe to eat.

“From March 1 Defra have identified certain parts of England as higher risk where poultry must remain housed (or the range completely netted), while outside of these areas free range producers may be able to let their birds back out with enhanced biosecurity.

“It is up to individual producers, together with advice from their vets to assess the local area risks for their own flocks.

“Some producers will be able to let their birds out and some will have decided, on the balance of local risk and to protect their birds health, to keep them indoors until the danger of infection has passed.

“Boxes of free range eggs are being labelled to inform consumers that they may have been laid by hens which are temporarily housed to protect their welfare.

“We hope that this is a short term measure and that it will soon be safe for all free range producers to allow birds back outside.

“Producers are ensuring that housed birds are being well looked after and strict biosecurity protocols are followed at all times.”