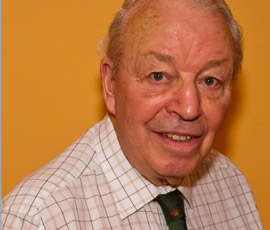 Stalwart of the Scottish egg scene, Dennis Surgenor, has just completed his last market report after 40 years of regular updates. For those Poultry World readers not lucky enough to be on the mailing list for the weekly SEPRA (Scottish Egg Producer Retailers Association) report, here, in full, is Dennis’s final contribution:

“Here it is. My last SEPRA Market Report. What a date to remember after 40-odd years, but then in last week’s Report I missed a most important date which, at the time, turned our Industry on its head?

Mr Edwina Currie provoked outrage by saying most of Britain’s egg production was infected with the salmonella bacteria.

She angered farmers, politicians and egg producers, some of whom were calling for her resignation and were threatening to sue.

“Most of the egg production in this country, sadly, is now affected with salmonella,” she told reporters.

Ministry of Agriculture ministers were reported to be extremely “angry” at her comments.

But so were many egg producers who saw their egg sales drop.

SEPRA held their first meeting in October 1970 when 23 egg producers met at Carluke to discuss their Industry and the effect of the demise of the British Egg Marketing Board, a Government organisation, which up until then had guaranteed to market all eggs presented to their packing stations.

Jim Steel, who was a dairy farmer and egg producer from Lanark was appointed Chairman, and it was his call, which saw the 23 producers agree unanimously, to form an Association in an effort to protect their livelihood.

Initially SEPRA was a means to inform fellow egg producer members of any surplus eggs which they had, and initially became an egg exchange. Also informing members of any market price changes.

News spread of the formation of SEPRA and despite an annual fee of £3.00, numbers rose to 57 in the Lanarkshire branch followed by 18 members from Ayrshire.

Another fact of interest is that the 57 members of the Lanark branch had a total of 459,000 layers.

Members held yearly dances, firstly in 1972 in Airdrie, at a cost I think of £4 per ticket.

Looking through the list of the founding members I see that only nine remain in egg production today. Extra members who have joined in the years following are new entrants to the Industry.

Meetings were held in Airdrie when speakers from Commercial companies told of their products and egg layers. All the meetings were well attended.

Our first Chairman was the late James Steel, and he was followed by many recruited from the Membership. For example Jim Nisbet, Peter Cochran, Peter Calder and Moira Henderson to name a few.

Another service provided to members has been the cost per dozen tables.

An un-named feed compounder gives me a feed quote each month for the supply of feed to a 10,000-bird unit and from that is calculated a cost per dozen table.

It has been a wonderful and interesting experience for me. I have met people from all over the country,

In 1977 I was awarded a Nuffield Scholarship and under the Nuffield sponsorship I toured USA and Canada finding out how the other half managed to survive.

In 1998 your then Chairman, Peter Cochran, received a request from an Edinburgh Charity for some help in setting up some small hen units out in Serbia. You will recall the war out there had destroyed land and also families. Men were shot leaving their wives to fend for themselves and without any cash income.

I flew out on the first of November 1998, to Bosnia. I had been asked to help some widows to set up laying units on their smallholdings and from there advise on a communal selling organisation.

The egg industry over the years had been good to me and it has given me much pleasure, a living and found me lots of friends. I hoped that I could, in this way, give a little something back.

These Muslim widows, 16 of them, lost their husbands during the ethnic cleansing that took place in Bosnia in 1992. Almost all the men from the village of Sanica were killed or sent to concentration camps.

There is little employment in these villages and it is difficult for these widows with dependent children to find a cash income as they had in the past relied on the family income from goods produced on their holdings.

With funding from various sources including Rotary, EU etc they managed to fund the purchase of 16 hen houses (including pullets), which would each hold 200 hens. Each widow will look after her hens which will be based on her smallholding and the eggs will be marketed by one person acting for the widows. They also had plans to set up a mayonnaise factory.

Through a friend and SEPRA member, Robin Bickerton, I was even gifted an old Moba twin-track egg grader which was taken out later.

I continued looking for any old unused tubular feeders members may have stored away and for which they had no further use?

I found it difficult to realise just how their homes and smallholdings had been pilfered by the invaders. They had no tools as they, like other things, had been stolen. Their cars had been flattened by tanks. They could not even give me sellotape for example, basic things for us in UK.

In 1995 I initiated yet another group of poultry folk, the Poultry Club of Scotland, which grew from less than 100 attending, to this year’s total at the Dunblane Hydro of 330.

The Hotel, Dunblane Hydro, tell me that the event is one of the most friendly and vibrant group of guests they have. There is a buzz even at time of registering and after the evening’s entertainment some are left until the sunrise talking, reminiscing.

But now it is time that I retire and leave all my friends in the poultry industry to change or also to retire in view of the forthcoming Welfare Regulations.

As I have been telling you all over the past weeks, Europe have not prepared like those in the UK. It is calculated that 50 million hens will still be housed in old battery cages. 13 member states are unlikely to be compliant with the directive.

One of the benefits to members has been the recognition of the benefits of the Association by the Department. We have had excellent co-operation and help from their staff in their efforts to help us with any problems out in the field.

Charles Russell and his staff have always been available and I am sure that in the awkward times in front of you Charles and his staff will continue to support you, as they have done in the past, to meet the ever changing EU Requirements.

The UK Ministry officials are to tackle the illegal eggs laid in the illegal cages and entering the UK market with UV lights.

I am told that there is a spray available which can camouflage any wire marks on an egg shell making recognition impossible? Whether this is true or not, I am sure some EU members will find some way of beating the ban?

But I am sure, as most producers will agree, that some members of the EU will just sit back and stay blind to the odd millions of layers in old cages?

I must, before closing, record my thanks to those who have contributed to the success and publication of the Report. Initially my wife typed each Friday and was followed latterly by Linda Steven of Grampian fame, and though she has followed her husband Malcolm out to Bangkok in Thailand she has continued to produce from Thailand each Friday this report and send it by email to you all.

Those of you without Internet connection receive the Report by Mail, which is typed and posted by Inchcolm Veterinary Services at Dunfermline. My final words are to wish you all a Happy Christmas and a Prosperous New Year.

Remember that the SCO on the shell of every Scottish laid egg is just one of your contributions to a Respected and Prosperous Scottish egg industry. I have copies of your Constitution, your Patent for your SCO jingle and old copies of your Reports are held in storage by the Museum at Wester Kittochside, East Kilbride.

Your Website will continue to be useful to you all and I hope if you see me on the street you’ll say Hello.

I have been honoured to serve you.”