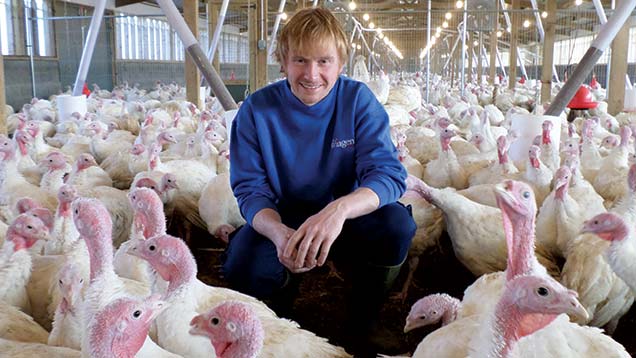 A set of siblings striding ahead in turkey production, a promising broiler farmer and a budding technical manager form the hotly contested shortlist for this year’s Zoetis/British Poultry Council Trainee of the Year. Roger Ranson profiles all four.

Sam Jones is the older of two brothers working for Aviagen Turkeys, who are competing for the Zoetis/British Poultry Council Trainee of the Year Award.

This is the second time that Sam has submitted an entry. The first was two years ago when he was on the company’s management trainee programme – now he has progressed to manage six grandparent farms.

Sam hardly thought twice about a choice of career. Like many in the poultry industry today, he was introduced to the work by his family. His father manages an Aviagen breeder farm in Cheshire where Sam began as a weekend egg collector at the age of 14 and took up full-time employment three years later.

Gaining responsibility for pedigree flocks and achieving a NVQ Level 3 work-based diploma led to a two-year management traineeship covering customer support and research, as well as hatchery and breeder skills. This hard work has culminated in promotion to his current position.

Coinciding with this was the option to enrol on the new, distance-learning HNC course in poultry production at Scotland’s Rural College (SRUC).

He said the first year of his HNC had increased his technical knowledge of turkeys, but had also taught him about the wider poultry industry, too.

Aviagen Turkeys director of production and veterinary support Dr Kenton Hazel has praised his “aptitude for working with turkeys, thirst for knowledge and infectious enthusiasm for everything he does”.

Lorraine McAulay, SRUC’s poultry programme leader, added Sam was always asking questions. “He has a sharp and very enquiring mind that seems to love to learn – it makes my life a lot easier.

“Work is great, always on time and I actually look forward to reading it. It makes me smile – all so well thought out and full of enthusiasm for the poultry industry that fills me with optimism for the future.”

If chosen as the winner Sam will continue to study at SRUC, possibly progressing to an MSc in applied poultry science. “This would help me gain a higher level of understanding, ability and credibility, hopefully enabling me to move through the company into a more senior position.”

Joseph Jones goes into the judging knowing that he has already won one award this autumn, by being named training provider Poultec’s young apprentice of the year.

Like brother Sam, he started working with Aviagen Turkeys at the age of 14, taking up a weekend shift at the Hermitage site, Cranage, Cheshire.

He became a full-time employee seven years ago on one of the production farms his father manages. Joseph has been given more responsibilities on the farm and is now finishing his Level 3 diploma in work-based agriculture.

“Joe has progressed exceedingly well in his Level 3 work-based diploma,” said his Poultec training assessor, Andrew Gotts. “He always gives clear, defined answers and shows knowledge and experience way above his years and time in the industry. I can see Joe going far, easily making farm manager within the next few years, and with further learning and development progressing towards area manager and beyond in the future.”

Dr Kenton Hazel, Aviagen Turkeys director of production and veterinary support, said Joe approached training with the same level of enthusiasm as his routine work, adding the theory aspects of poultry production to go with his practical knowledge.

If successful with the Zoetis/BPC award, Joe intends to use the grant as part-payment towards a management qualification such as the business and management foundation degree offered at his local South Cheshire College.

“I feel this qualification would be incredibly beneficial, allowing me to push on and continue to learn about more management-based topics such as managing people, financing and planning.”

“An opportunity such as this could be all important if I am to meet my ambitions of first becoming an onsite manager and progressing on to a more senior role.”

A year ago Aaron McKenna graduated with a BSc in zoology at Queen’s University, Belfast, and had planned to transfer to veterinary medicine. Instead, he decided to opt for “on the job” training and his careers adviser made him aware of the Moy Park graduate management programme.

Poultry farming wasn’t, however, completely new to Aaron, who grew up on a dairy farm in livestock-dense Northern Ireland.

“For me a career in agriculture is always what I wanted to do,” said Aaron. “Having spent just over a year within the poultry industry I feel it is the industry with the best career prospects and I very much intend to stay put.

“Over the next six to 12 months I hope to continue to build on my technical knowledge. I think knowledge and experience are the key in this industry – these skills take time to develop, but I hope to gain as much as I can and try to progress within my company.”

Moy Park took on 19 graduate management trainees in 2013. Aaron has completed his first 18 months by spending periods at its Donnaghmore hatchery and with broiler growers in Co Tyrone and Lincolnshire before moving to the company laboratory at Anwick and joining the Agri-Technical team.

With his knowledge of poultry starting from scratch, Aaron has sought to gain hands-on experience wherever possible. During initial hatchery work he developed a micro-surveillance programme for monitoring hatchery hygiene across the company and has become responsible for co-ordinating on-farm PCR testing.

He has also undergone ten one-day training sessions as part of his CMI Level 5 management course, achieving this qualification in July. “These sessions focused on personal skills such as project management, leadership and time management.

Muhammed Maliki, Moy Park category technical manager for agriculture, said Aaron had made a real impact, pointing to responsibility in a range of areas including on-farm campylobacter sampling across the group.

Aaron says he would use the grant to undertake a post-graduate certificate in intensive livestock health and production with the Royal Veterinary College.

Few could match the range of experience that Emma Mingo has had across the farming spectrum in the first 10 years of her career.

At 16 she began studying to be a veterinary nurse, then worked on a farm milking cows and qualified to be an inseminator. Becoming self-employed, she built a clientele of farmers for whom she did lambing, tractor work and all-round duties. To broaden her experience she travelled to New Zealand and worked on two different farms.

On returning to the UK she decided to do something completely different, finding a job as a stockman for 40,000 free-range broilers and 10,000 organic broilers.

That was in September last year on the Oaks & Pitts Farm at Newton St Cyres, near Exeter, and by March she had completed a work-based diploma Level 3 in poultry production – normally a year’s course – and been appointed farm manager.

Employer Thomas Browne said he was so impressed when meeting Emma he offered a job straight away.

“Even from the first day you could tell she was no ordinary farmworker. Over the following weeks it was very apparent that she is a highly motivated, practical and intelligent woman.

“Out of the 10 years of being a poultry farmer and employing lots of people, Emma is by far the best and the first person that can manage the farm in its entirety and not only that, but she took to it with quite staggering speed and skill.”

Poultec Training assessor Ricky Isley spoke of the speed at which this finalist had picked up knowledge. “After a couple of months on the course Emma took full control of the farm and proved this was a good decision with the results she was achieving,” he said.

“Emma has ambitions to run her own free-range poultry unit and make it the best in the South West. I can see her being very successful in this and she’s also expressed an interest in becoming a trainer or adviser within the industry.”

Emma would use the Zoetis grant to enrol on a poultry business management course at Harper Adams University to provide further understanding of poultry science and food operations.

The four candidates will meet the judges this month (November) to determine the winner and the two runners-up, who will attend the British Poultry Council annual awards ceremony at the House of Commons on 2 December, when the winner will be announced.

The winner benefits from the £2,000 training grant from Zoetis, and receives a £500 cash prize from Poultry World and a commemorative plaque.