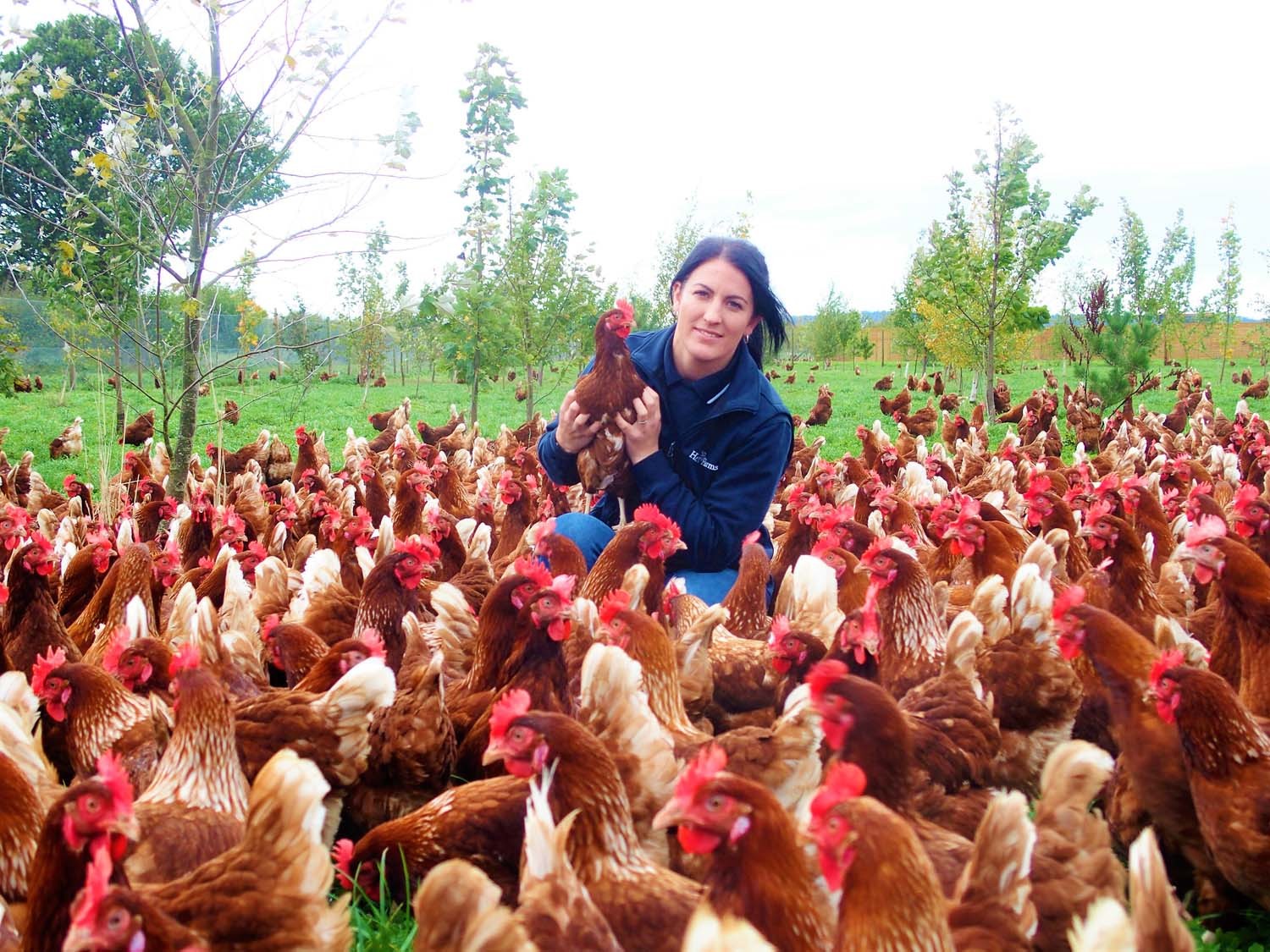 Sam says she has developed a passion for the science behind poultry farming - something she hopes to develop if she wins the training grant. Photo: Sam Alexander

As a child, Samantha Alexander had a passion for animals and when she was 16 she took an egg collecting job advertised in the local shop in Maybole, near Ayr. Three years later she moved on to work with cattle and sheep. “This was valuable experience, but it was here that I came to realise my passion for poultry and animal welfare,” she recalls.

In 2010 she started work with Glenrath Farms and at their Blythbank Farm – the largest free range farm in Europe – where she ran a 32,000-bird unit for two years before moving to Heal Eggs in Shropshire.

At this time the company had 119,000 free-range birds over four sites and a colony site of 120,000. “It was here that I started to learn the processes and protocols for running salmonella testing and audits, as well as the paperwork requirements for Lion compliance, Freedom Foods and also self auditing,” she said.

When in 2014 an aviary pullet rearing unit was built, Samantha was appointed to manage it. “Under her guidance we have consistently produced flock after flock, some of the finest pullets I’ve ever seen which has in turn had a significant impact on our egg laying performance,” says Tony Heal, managing director of Heal Farms.

“Sam’s desire to learn and develop sets her apart from others in this profession, and she has the ability and drive to become a leading manager in this industry and a key asset to our business.”

After 15 years in the poultry industry Samantha retains all her initial enthusiasm: “I’m very passionate about the inner depths of bird behaviour, biology, nutrition and welfare. This is why I’d like to go on to study for a MSc in Applied Poultry Science with SRUC, that would greatly benefit both myself and the company as we look to expand.

“I’ve developed a passion for the science behind the hens and would love to further explore the importance of getting all the correct fundamentals in place to rear and maintain the best flocks. I hope to see my career progressing as Heal Eggs grows, to be more involved in the decision making such as choosing laying systems and breeds, having our feed mill UFAS accredited.”

Working with pullets and layers, there wasn’t the need to undertake formal training for a Diploma in Work-based Agriculture (WBDA), but Samantha wanted to do this so she could move on to further courses.

Ricky Isley, agricultural assessor for training provider Poultec, says Samantha has a very good eye for recognising problems with the birds and coming up with ways to solve them.

“Sam shows a great deal of pride in running her unit. Sam is very technical with high standards and is very interested in poultry science. She will progress to be a sought-after and respected manager in the industry.”

How would she attract more young people into the industry? “ln my experience providing more workplace training opportunities with a recognised qualification at the end could make a career in poultry more attractive to young people. Giving people the opportunity to see that the role of poultry operative is not necessarily a stop gap, as it seems to be for many, but can lead to a career and progression up the ladder.”

The winner will receive a £2,000 training grant and a £500 prize from Poultry World at the British Poultry Council’s annual awards, at the House of Commons on 5 December.

It seemed that Warren Knights was predestined to start a career in the poultry industry.

One of his friends from nursery school through to college in Norfolk was the daughter of broiler producers Tim and Sue Bright and when he was nearing the end of his college course they offered him an apprenticeship on their family farm at Mileham, near King’s Lynn.

“We are a small family business, running a poultry farm of 108,000 birds,” says Mr Bright. “We took Warren on in May 2016 and this gave him some confidence and an opportunity to use his work ethic – he was never afraid of tackling any job.

“He hadn’t grown chickens before, and so straight away we enrolled him with Poultec to start his Work-Based Diploma in Agriculture (WBDA) in poultry production. Initially after showing him the daily routine, it wasn’t long before I felt confident for him to work without being so closely shadowed.”

His training was going well with extra sessions each month. Warren was gaining confidence, going from strength to strength on the farm through the summer and really feeling he had turned his life around.

Then, at the beginning of September, Tim Bright was given a diagnosis of leukaemia and started a very long recovery process with chemotherapy.

“Our world was turned upside down,” says Mr Bright. “Warren worked tirelessly with my wife to keep the farm going, with me only being able to oversee and make sure everything was in place as it should be. By January 2017, with the side effects of my chemo a little more under control, I was able to continue the physical side of the business to work alongside Warren.”

During this time Warren carried on with his training, but avian flu restrictions halted any visits that Nathan Raines, Poultec associate director, could make.

Mr Bright adds: “Warren has shown the dedication required to be a successful poultry manager. Without Warren we would have had to shut the farm until I had recovered enough to start again.”

Warren, now 19, completed his level 2 WBDA course and was nominated for two awards with Poultec in the summer.

Nathan Raines comments: “When I first met Warren he was a very shy person but over the first few months of the training programme, I saw his confidence grow both on the farm and during the Apprentice Academy sessions with other young apprentices where he made excellent contributions to group work and discussions.

“It was around half way through his apprenticeship when his employer became ill that Warren had to step up and take on far more responsibility on the farm including a lot of the management tasks. He did this with great enthusiasm and success.

“I believe that Warren has shown a real commitment to succeed in his short career, and if he continues to progress he will become an excellent farm manager and for somebody of his age the sky is the limit within this progressive industry.’

The farm grows broilers for Moy Park and in September E C Drummond began renting the unit from the Bright family, appointing Warren as farm manager. He is looking to further his WBDA qualification and benefit from further courses including people management.

Twelve years ago Klaudia Roszkowska came to the UK from Poland to explore and experience a different culture and lifestyle as well as seek career opportunities.

She began work in a poultry processing plant in Hereford in a quality assurance role, which kindled an interest in what happens on the farm. But a year later she moved to Tyrrell’s Crisps mainly managing day-to-day production.

Three years later in 2010 she joined Cargill Meats Europe as chick process team leader at its Shobdon hatchery. “This opened my eyes to the more technical side and made me realise this is where I could maximise my potential, so when the opportunity arose later for a technical role I took it,” she says.

“It became clear that Klaudia had an appetite to learn, progress and develop in terms of both herself and the hatchery performance as a whole,” according to Phil Harris, Cargill hatcheries manager. “Her relentless determination to seek answers coupled with regularly challenging the status quo made her a stand-out candidate for future development.”

Her new position in 2015 of technical incubationist, focused on improving performance, efficiency and cost. She is seeking continuous process improvement, dealing with customers and claims, and monitoring hygiene and biosecurity.

“Two years on we are reaping the rewards of our investment,” says Mr Harris. “Klaudia’s self-drive and dogged determination have continued. She has developed the role to focus on the key criteria that really make a difference and she has made some significant progress in taking the hatchery forward.

“Klaudia’s work ethic, in conjunction with the training she has undertaken, has exposed her to new concepts and thinking as well as developing her as an individual. She has become more focused with a greater depth of knowledge, has a better understanding of her role and where it fits into our organisation and, more importantly, understands where she can make a difference.

“She is a great asset to the hatchery and a credit to herself – still as passionate and enthusiastic as ever.”

“I love my job because there aren’t two days the same,” she adds. “Moving to the poultry industry was probably one of the better decisions for me. I know that I’ll never be bored and there’s always something new I can learn.”

Klaudia began studying for a Level 3 WBDA earlier this year after she had already taken a number of other more general courses, and was keen to focus on more specific poultry training.

Ricky Isley, of Poultec, says Klaudia showed a keen interest in the technical side of poultry, ensuring/checking the quality of the chicks leaving the hatchery and coming up with ways to improve the process and improve biosecurity.

“She’s an asset to the industry and shows a very good level of technical knowledge and problem solving abilities,” he says. “I can see her as a hatchery manager or an adviser at some point in her career.”

Klaudia’s choice for further education would be to study for the Applied Poultry Science PgDip with SRUC.