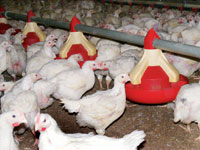 When nutritionist David Filmer retired he wanted to change the way broilers were fed, to better mimic natural conditions and boost efficiencies. Almost a quarter of a century later, after a string of trials and developments, he has achieved his goal, with the launch of a new management system, Mini-Flockman.

Producers may remember the original Flockman system, launched in the 1980s, which controlled the house environment and broiler nutrition, as well as weighing birds and feed and linking to a central computer to produce current and historical data. However, at up to £10,000 a house, the complicated system never really took off, and Mr Filmer set about developing a cheaper, simpler alternative.

Following years of research and trials, he was convinced that a more natural way of feeding broilers would improve farm efficiencies and bird welfare. So he designed a new automatic system to imitate those conditions, and has produced some exciting results as a consequence.

“I was always taught that you should keep an edge on an animal’s appetite and respond to how they are eating,” he says. “Ad-lib feeding, with feed in front of the birds all the time, is not natural and results in inactive crops, incomplete digestion and poorer feed efficiency.”

Instead, birds should be fed several distinct feeds a day, with the pans becoming empty for several hours in between. This means the birds eat more aggressively until full, and then leave the pans, allowing smaller or timid birds access to the feeders. By filling their crop with feed, the birds digest it more completely, improving both feed conversion and litter quality, through reduced ammonia emissions.

Mini-Flockman enables producers to set the timing and amount of feeds throughout the day, and alter lighting programmes accordingly. They can enter stocking rates, breed, age of crop and other parameters for more accurate feeding, and can choose from 10 pre-set regimes or develop their own tailored programme.

Field trials have shown an average increase in weight of 55g, with a 0.053 improvement in feed conversion, 10-20% reduction in mortality, and a 3.79p/bird increase in margin per crop – an average benefit of £1083 a house per crop. At a cost of £1850 + VAT each unit pays for itself within an average of just two crops, says Mr Filmer.

Chris Lukin, who keeps 100,000 broilers in four sheds at Townsend Farm in Somerset, was one of the first producers to install the Mini-Flockman. “I installed it in one shed two years ago, and after the first cycle I saw an improvement in performance. I definitely got my money back after the second cycle, and I installed the system into the other three sheds 18 months ago.”

Before changing to the system, Mr Lukin fed the birds ad-lib, with just one dark period overnight. He now feeds them every six hours, with a dark period in between each feed, during which the pans are refilled. “That way, you don’t get them rushing at the pans.”

For the first week, the young birds are fed four times a day, reducing to three times a day from days eight to 21, to encourage them to crop up properly. Feed is restricted for the first three weeks, to ensure correct growth of the birds’ frames and legs, before pushing for flesh from day 21 onwards, when feeds increase to four times a day. “I have just changed the profile in one shed to push the birds on a bit more – it is great to have that flexibility to react to the birds’ weights.”

Mr Lukin has noticed a significant improvement in leg strength, liveweight, mortality and evenness of his flocks. “I have one crop of Cobbs at the moment which is doing exceptionally well – they are three days ahead of schedule. And you don’t get this massive range in weights, because the small birds get the chance to feed, and the large birds don’t have an opportunity to get fat – which in turn reduces mortality.”

On average, mortality has improved from almost 5% to 3.5-4%, and feed conversion rates have dropped from almost 1.9 to below 1.8. “The best I’ve had is 1.7.” Weights have also risen to 2.5kg at 42 days, although some of that could be attributed to a change in ration.

Mr Lukin’s latest Cobb crop were thinned at 33 days and finished at 39 days – achieving liveweights of 2.03kg and 2.54kg, respectively – an average of 108% of the target weight. Mortality averaged 4.15%, feed conversion 1.71, and an EPEF (European Production Efficiency Factor) of 376. “There is no doubt that the system has led to far superior feed conversion and an improvement in the end weights, leading to better returns all round.”