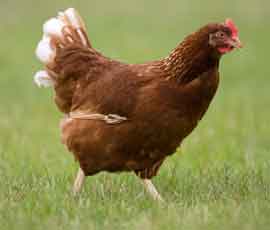 Flubenvet is the only worming medication that is licensed for use with chickens in the UK and is the only treatment that can be used without requiring a withdrawal period between use and consumption of hens’ eggs.

Shortages of the 1% 60g packets, which is available without veterinary prescription for home-mixing, and the 2.5% 2.4kg packages designed for small, licensed feed mixers, began at the start of September.

Marriage’s, an organic feed firm, said it took its Flubenvet-based product off the market at the end of September as the worming medication was unavailable in the 2.4kg size. It produces about 20t of layers pellets mixed with Flubenvet a month.

James Marriage, sales executive at the firm, said the majority of Marriage’s feed mixed with Flubenvet was sold through licensed retailers or directly to smaller producers. “Many of these people hoping to worm before winter will be disappointed,” he said.

Others are finding the lack of easily-available worming medication frustrating. Judith Galloway, who is a licensed distributor in the south-west of Scotland, said the rainy end to summer had created big problems with gapeworm in birds.

It may be possible to buy Flubenvet, she added, so long as the supplier had a category eight licence and was satisfied that no more than 30kg of feed was going to be mixed. However, she recommended anyone who was unsure should speak to a vet.

A spokesman from Elanco apologised for any inconvenience caused and said the company was committed to resolving this as quickly as possible. Elanco was “in the process of catching up with the increasing demand for Flubendazole products,” and was “expecting supply of the 1% 60g and 2.5% 2.4kg Flubenvet to become available in the near future”.

Elanco’s spokesman also advised anyone concerned about worming strategies to speak to their local vet or contact Elanco direct. There were supplies of the 2.5% 240g product and these could be directed according to need.