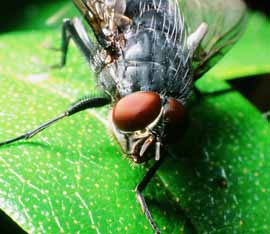 A British entrepreneur based in South Africa is confident that his dried fly larvae will be the alternative protein source that can reduce agriculture’s dependence on fishmeal.

Jason Drew and his brother first began experimenting with musca domestica (the common housefly) in 2009, feeding larvae with waste materials that local abattoirs paid them to take away. They have developed a way to harvest, dry and mill the larvae into flakes for meal, suitable for use in poultry feed.

Their company, Agriprotein, is currently selling Magmeal on a small scale, about 10t a month, but is hoping to find funding to expand production beyond next year. His eventual target is to produce 24.5t of dry larvae meal a day.

Mr Drew has found 1kg of fly eggs can turn into 400kg of larvae in 72 hours.”What we are trying to do is industrialise the production of flies, just like the production of chickens and farmed fish – flies are part of their natural food.”

Currently 25% of the fish taken from the sea is used in fishmeal. He believes that recycling human and animal waste products will become commonplace over the next ten years. “We recycle our tins and plastic, why not our natural waste as well?”