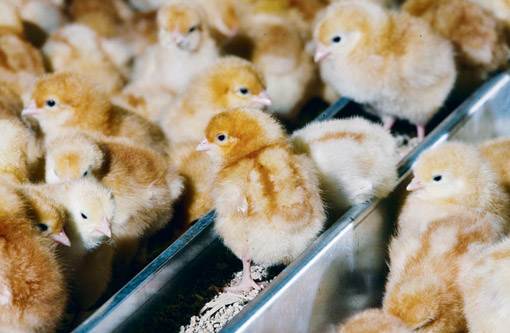 For the next 18 months, Poultry World will be following the progress of a single flock of free-range laying birds from hatching, through rearing to end of lay

The featured flock of 7000 Lohmann Brown was hatched at the Millennium Hatchery in Studley on 1 January 2012.

Now nine weeks old, the birds are being reared by Humphrey Pullets on one of their rearing farms in south-east England, and will then be moved on to Linda Courtney’s conventional free-range layer unit at Riverside Farm in East Sussex in April.

This will be the first time Mrs Courtney has used Lohmann Browns, which have a reputation for delivering consistent numbers of good quality brown eggs, with low numbers of seconds.

The Riverside flock was hatched in what is reportedly the most modern hatchery in the UK – the Millennium Hatchery at Studley in Warwickshire. Used jointly by both HyLine and Lohmann GB, and incorporating the latest technology such as Novatech vaccination and IRBT equipment, the hatchery is both BEIC Lion Code and RSPCA Freedom Foods approved.

“The main aim after hatching is to ensure the birds are given access to food and water as quickly as possible, therefore same-day hatching and delivery is commonplace. If the birds hatch first thing in the morning, we aim to have them delivered and set up on the rearing farm by early afternoon.

“Expansion of the free-range market over the last three years means we are increasingly working with companies like Humphrey Pullets, though we do sell direct to the large scale producers who rear their own birds,” he adds. 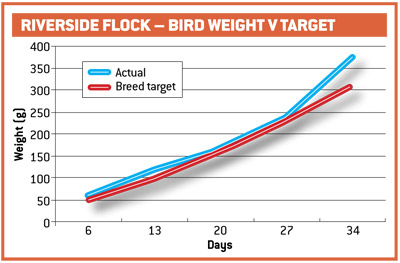 The Riverside flock is being reared in the south-east of England, on one of Humphrey Pullets six UK-based rearing sites.

“We view rearing as a 20-week cycle,” explains general manager Charles MacLeod. “The chicks arrive at day old and are delivered to the laying farm at 16 weeks of age. It then takes four weeks to turn the house around, including manure removal, cleaning, disinfecting, testing for salmonella, fumigating and setting up the house for the new flock.

“All heating, water and feeding systems are serviced, clean shavings are then laid on the floor of the house, which is pre-heated in preparation for the new flock’s arrival.”

Emphasis is placed on reducing bird stress, explains Mr McLeod. “In the first few hours following hatching, the energy and hydration requirements of the chick continue to come purely from what they have gained while being in the egg. New chicks still have a certain amount of yolk sac to feed off, but in order to metabolise this, they need water. It’s therefore vital to provide quick and easy access to feed and ambient temperature water.”


As soon as the Riverside flock arrived at the rearing farm, the chicks were vaccinated, while still in the boxes, for coccidiosis and infectious bronchitis, using a spray that contains a blue dye to check that all birds have received the treatment.

“Following vaccination, the chicks are left to dry in the boxes for 20 minutes and start to adapt to their new surroundings. The birds are then carefully removed and given easy access to water, provided in special drinkers. Food is placed on strips of special corrugated cardboard that run the length of the shed.

“If a producer has a specific disease challenge on farm, we can instigate a bespoke vaccination programme, otherwise we will use a standard programme, designed by Humphrey’s consultant vet to provide optimal protection against common poultry diseases in the UK.”

When the Riverside flock first arrived in rear, light was supplied for 20 hours a day, but this has been rapidly reduced to just 10 hours.

“The quicker you can reduce the amount of light, the better,” says Mr MacLeod. “Lighting hours will be increased again on the laying farm, so the birds think it’s spring time and come into lay.”

Nutrition is also crucial, with the chicks doubling their bodyweight during their first week (see graph). “We started by feeding the flock a high specification chick crumb for the weeks before moving on to a chick mash. The diets used are varied depending on how the birds are performing in relation to breed targets. We monitor weight at all times and will adjust nutrition accordingly if the birds are significantly under- or over-weight.

Mrs Courtney will visit the flock at least once in rear, joined by Humphrey Feeds poultry specialist Steve Clout, who will advise her on optimising the flock’s performance until the end of the laying cycle. “We try to tailor the flock to the customer’s specific requirements, rearing the birds on like-for-like systems,” says Mr Clout.

“The focus in rear is on growth and development. We want this flock to be in optimum health to achieve its laying potential. It’s vital these birds are up to weight when they leave the rearing farm. Stress and weight loss during transportation can damage long-term performance and there is increasing evidence to suggest that problems resulting from underweight birds will manifest later on in the laying cycle with issues related to egg numbers and quality.”

Poultry farming started in 1999 at Riverside Farm near Hailsham in East Sussex.

“We started with 5,000 birds and have slowly developed the business,” explains Mrs Courtney. “New stocking density regulations currently limit us to 7,000 birds. But we have been granted full planning permission to develop the business further by increasing the size of the shed to allow for 10,000 birds.”

That investment is currently on hold until there is greater stability in the sector and a rise in egg price allows a return to profitability. “An extra 20p per dozen would solve many issues,” says Mrs Courtney.

The new flock will be the 12th at Riverside Farm, and the first time they have used Lohmann Browns.

“Our current flock is performing well at 85% production and egg weight is averaging 68g,” she explains. “The main motivation for changing flock type came from a desire to integrate the business further. We will be working with Humphrey Pullets and Humphrey Feeds, who supply all our feed.

“Steve Clout, our representative from Humphrey Feeds, visits the farm most weeks and has a unique and in depth knowledge of the birds’ growth and development. This will prove to be hugely beneficial when it comes to making decisions related to this crop and ensuring optimum bird performance.”

Riverside Farm operates a free-range floor system with a deep litter area covered by slats and with nest boxes running through the middle of the shed. Popholes lead to an outside veranda and on to the range, which includes a dust bathing area.

“Our current flock will be depleted in early April and the new flock arrives at the end of April. During this time we will thoroughly clean the shed. A local farmer collects all the muck, the shed is disinfected, fumigated and treated for red mite. We might then, if we are lucky, have a few days holiday before returning in time for the arrival of the new flock.

“We will put a lot of work into the birds when they first arrive, helping them quickly adapt to their new surroundings and ensuring easy access to feeders, drinkers and nest boxes,” she continues.

“We have arranged to visit the flock in rear and feel this is a hugely important exercise. We are supplied with weekly updates, via email from Humphrey Pullets, including detailed information on the bird’s growth, feeding regimes and lighting set against breed targets, plus vaccination programmes.”

To date, the pullets are growing well and Mrs Courtney is starting to turn her attention to preparing for the arrival of the crop.

“Using a different breed and an alternative rearing company is a new venture for us, plus having Poultry World follow our progress is a little daunting. It should be an interesting 2012.”

* Poultry World will Follow the Flock later on in the year as the birds leave the rearing site and settle in at Riverside Farm ready to start laying.