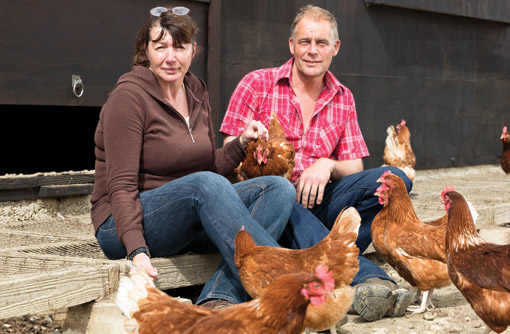 For the last 18 months we have been following the progress of a single flock of free-range birds through hatching, rearing and laying. Poultry World reports for the sixth and final time from Riverside Farm in East Sussex

Riverside Farm’s poultry house has been standing empty, the flock depopulated at the end of May.

“The birds went just over four weeks ago and we had the usual challenges of turnaround,” comments Linda Courtney. “We are not a multi-age site, so it’s important to be organised and work quickly and efficiently.

“Overall I was really pleased with the flock. They performed exceptionally well given the challenges faced. This was the first time we have used a different breed, having traditionally used Hy-Line birds. We found the Lohmann to be strong and steady.”

Overall the flock produced 316 eggs per bird, with average production of just over 85% and a mortality rate of 4.5%.

“Performance being ahead of breed target is a great bonus,” says Mrs Courtney. “As a professional farmer you take a lot of confidence when the birds produce over and above what is expected of them. There is always room for improvement, but we feel like it has been a job well done.

“We had a slight dip at 61 weeks (see graph). Our neighbours were carrying out major building work and used loud machinery that stressed some of the birds. As soon as the building work stopped, productivity picked up again.

“There will always be external challenges to overcome and we have learnt to be flexible, aware of what is going on around us, adapt and keep the birds as happy and productive as possible.”

Many of the challenges faced at Riverside Farm during the past 18 months have been due to the prolonged spells of wet and cold weather. However, as Steve Clout of Humphrey Feeds explains, the timings for this crop have been good.

“Linda and Ralph took delivery of these birds at an ideal time in terms of seasonal opportunities to maximise performance. From 50 weeks, a flock’s productivity will naturally decrease. But birds are stimulated by warmer weather, as winter turns to spring and summer. So it’s better to have an older flock on farm from April onwards to help keep productivity high.

“Early summer is also a good time for depopulation, as warm and dry weather make cleaning the poultry house, and other jobs such as transporting manure across the farm or on-going range maintenance, that little bit easier. This of course works in theory, but as UK farmers know all too well, we have seen some very wet summers in recent years.”

Mrs Courtney points to puddling on the range, which has been a problem for the flock just gone. On-going worm control has been a key part of the flock health management programme. “We look at the worm count in dropping samples and effectively you treat a host bird in the current flock to stop a future worm burden building up on the range.

“In May and June you would expect to see a even more birds out on the range and enjoying the sunshine. But the last flock was a little reluctant to range, in part due to the poor weather. We encouraged the birds out and then reduced the amount of mud and water they carried back inside by placing wire mesh on the pophole ramps.

“We sell our litter to a local farmer and, considering how wet the weather has been, the litter was relatively dry and friable. The farmer was happy with its condition.”

The aim for the final few weeks of lay is always to limit the number of seconds, poor quality or unsalable eggs, explains Mr Clout. “Maintaining good egg and shell quality are vitally important in the final weeks of production as this is the period where producers can make a margin, as the majority of input costs have been covered.

“At Riverside Farm we made only minor changes by adding multivitamins into the diet, plus a small increase in the amount of marine shell to help maintain egg shell quality. Linda and I discussed the importance of consistency of diet for older birds.

“The flock was performing well, so our preferred approach was to continue using the same diet. Changes in diet can place undue stress on older birds, and any resulting drop in productivity can be costly. In its most basic sense, ‘if it isn’t broke, don’t fix it’.

“The best advice is to plan well ahead; start thinking about end of lay flock management from 50 weeks onwards, look at all areas of production, but especially health and nutrition. Any major change can be disruptive and producers need to consider the risk of introducing a lower specification diet, which can result in a significant drop in productivity.

“There are seasonal issues to consider as well. For Riverside Farm, we knew feed intake would naturally decrease due to the impending warmer weather and wanted to avoid any major changes to diet during this period.”

The majority of the eggs at Riverside are sold to packer Hoads Farm, with whom the business has a robust partnership. “Hoads have been fantastic,” says Mrs Courtney. “They are forward thinking, take an active interest in the farm business and offer us a reliable and professional outlet for the majority of our eggs.

“We also sell a small percentage to local businesses and have found these private sales to be a crucial lifeline and a much needed opportunity to further optimise profitability.”

Despite the recent increase in demand for free range, profits continue to be limited and business is tough going. “We are under no illusions; there has been talk about a drop in egg price, although thankfully we have not seen this so far.”

“As well as local egg sales, we also sell a number of birds locally and have found this to be a useful source of additional income. For this flock I have managed to sell just over 1,000 birds to local smallholders, hobby farmers and back garden producers.

“Processed birds make in the region of 25p/kg, where as I can sell an end-of-lay hen for £2 to a local smallholder.”

The next flock of pullets has just arrived, with Mrs Courtney opting for Lohmans again. “We received weekly updates from Humphrey Pullets regarding vaccination, mortality and growth rates, and the pullets were above their target bodyweight throughout rear. They have just been delivered at over 70g above target weight and with 91% evenness, which is very encouraging. It should see the birds get off to a robust start in these warmer summer months.”

Looking further ahead, work has started on increasing the farm’s capacity to 10,000 birds by extending the current poultry house. The concrete base has been laid and construction work on the house is planned for next year, for it to be ready in 2015.

“What I am learning,” says Mrs Courtney, “is that UK egg producers experience similar production issues day in, day out. As an industry we need to open the lines of communication and be better at sharing our experiences. It’s very easy to get caught up in your own farm and not have the opportunity to meet with other producers – free range, barn or conventional.

“That really is the main reason I agreed to take part in this series with Poultry World and, although opening the farm doors to the outside world has been a daunting prospect, I hope that it has given other egg producers an opportunity to see that we are all in the same boat and need to pull in the same direction.”