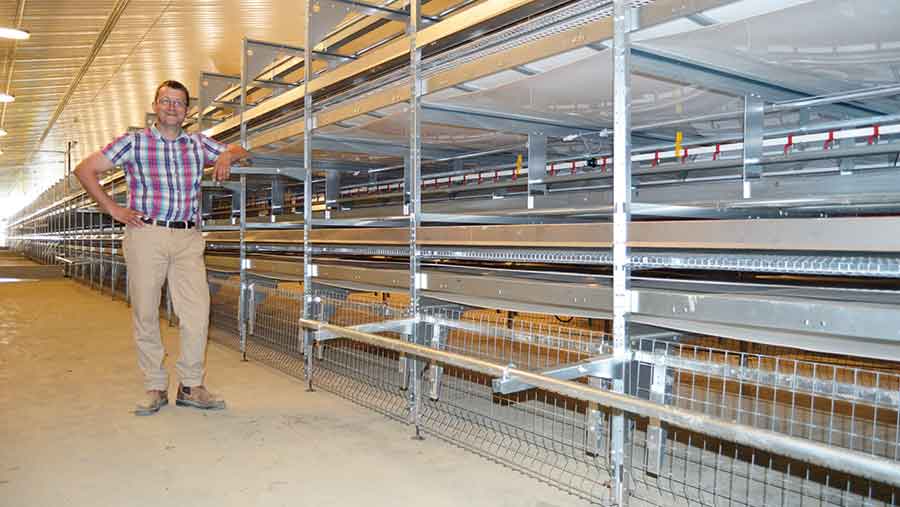 Powys dairy farmer Rob Evans is the latest to diversify into free-range egg production in a bid to make his farm more economically sustainable.

He has just invested in a 32,000-bird multi-tier unit, with provision for doubling up on that at a later date. One feature is that the unit is the first aviary system in the UK supplied by German company Hellmann, once a familiar name here for its battery cages.

The farm, near Pontrobert, currently keeps 400 cows on 150ha along with contract maize, as well as wheat and barley for reseeding.

But Mr Evans is perhaps more widely known as the proprietor of Training for the Future (TFTF), a training centre for land-based and construction industries, also based on the farm. 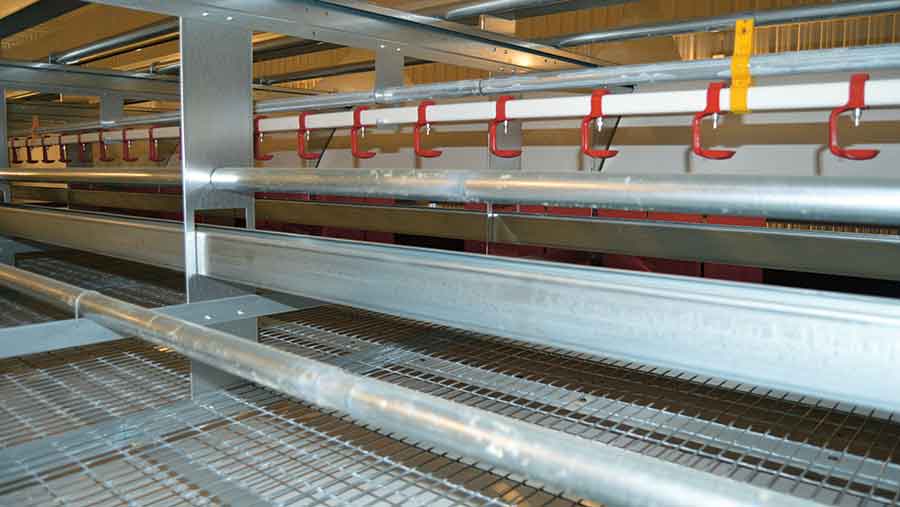 The topmost level has feeders and drinkers

All this might seem enough to keep him occupied, but with two adult sons, Nick and Charlie, now hoping to make a living from the farm, something else was needed “to increase output from the same acreage”.

The laying unit has been a long time in the planning in anticipation of the next generation’s needs, and it finally got under way before the five-year approval window ran out in March.

Poultry World visited the site on an open day held in August, a week before the birds were due to arrive, and the construction team were still busily working around visitors to complete the project on time. 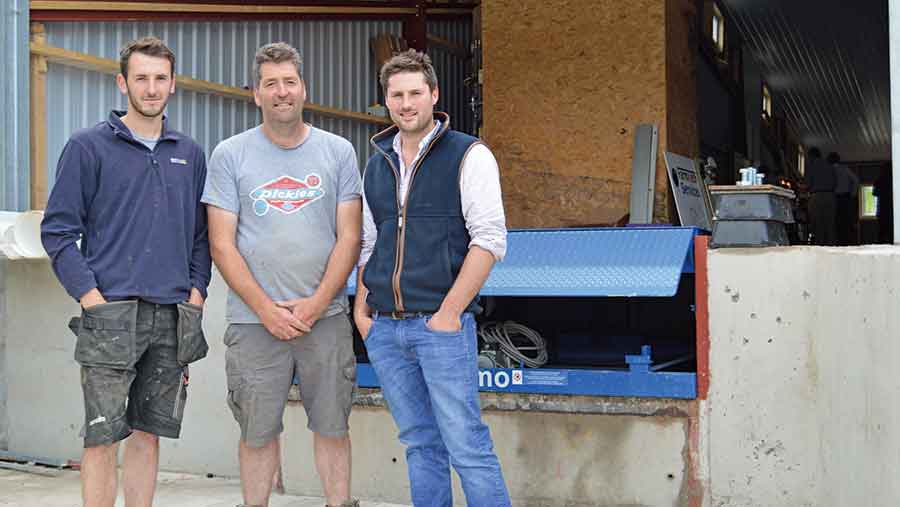 The design of the unit is, perhaps, a little unconventional, with the house having a dividing wall along its length at the roof apex. Either side of the wall are two banks of the Hellmann Pro 10 aviary systems, three tiers high and housing 16,000 birds in each.

Key features of the system include the provision of feeders and drinkers at every level, as well as nest boxes on the first two levels.

“It means that the bird can find everything it needs at each level, unlike some systems,” explained Roger Lewis, who has recently taken on the UK agency for Hellmann.

For example, some systems have no drinkers at the top, he said, so there can be a lot of fiddling about getting the birds to use the entire system.

Nestboxes are on one side of the tier, making them easy to inspect, with back curtains that are raised by an automated system, helping farmers spot and collect casualties.

The boxes themselves also have an unusual central collection channel under slightly overlapping floor sections to minimise the rolling about of eggs and chances to get dirty. 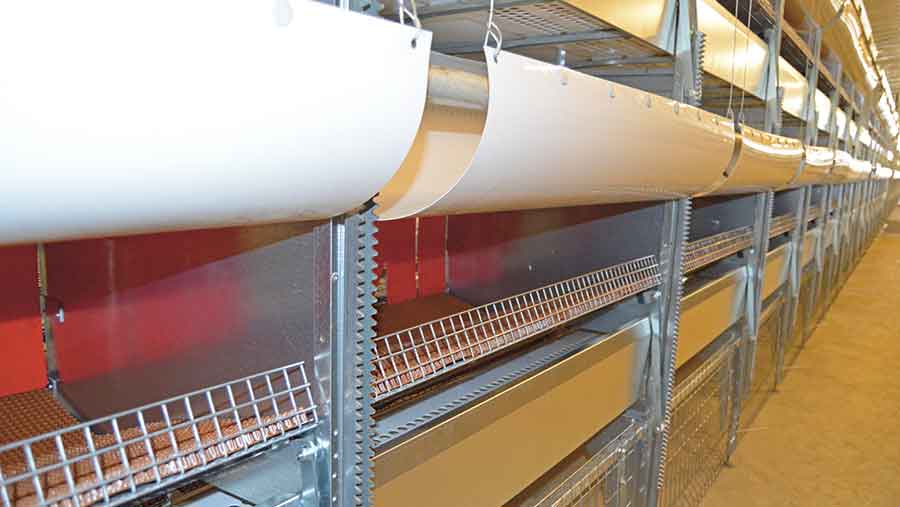 Mr Lewis has plenty of experience with laying systems, as he also runs Mid Wales Egg Packing, with 400,000 birds under contract, supplying Anglia Free Range Eggs and Tesco. His own unit has 29,500 birds with another 15,000 on a leased unit in Devon.

“Hellmann haven’t really got a presence in the UK now and most people haven’t heard of them, but we’ve taken the full dealership on and are going to drive it forward,” he said.

A firm local to Mr Evans, Advance Building Design, of Newtown, carried out the house design work. “I sat with them for a day and we worked out what was needed, especially on the steel specification,” he explained.

Ventilation is powered by gable end extraction fans, six in total of differing sizes for each half of the house, with fresh air entering through roof inlets and a bank of side inlets.

There are five steps of ventilation using the constant speed fans, with two fans running on the minimum ventilation setting.

Mr Evans played a hands-on role in the project, starting off by travelling to Germany to look at some Hellmann units.

“We’ve seen all the multi-tier systems, and we liked this one,” said Mr Evans.

“It’s not cumbersome like some, just simple, easy and low cost, but a good-quality build.”

Hellmann is a family business, Mr Evans explained, and they manufacture in-house rather than bringing in components from outside.

He also liked the fact they kept all the templates from previous jobs. “They can go back and make you a part from 10 years ago – all the dies are there hanging on the wall.”

His training business TFTF was founded in 2008 when he decided to use his knowledge from his agricultural background and diversify into plant training.

It operates from its own purpose-built and accredited CPCS- and Lantra-approved test centre on his farm, and employs a number of experienced instructors, offering courses in a range of disciplines from agriculture and construction, to environment and conservation.

With this background knowledge, it is no surprise that he took on the construction himself.

“We bought the steel locally, as we feel that’s important. It was cut by local firm Mervyn Roberts, and then we used our own labour.”

This was achieved with family members, the five full-time farm staff and several self-employed contractors.

The specification for the ventilation was worked out in conjunction with Phil Shaw, director of STX in Bury St Edmunds, who then built the control panels.

The project includes a couple of innovations, one being their own design for the pop holes. These are made from specially fabricated metal, plastic-coated on the exterior, rather than timber, for durability.

They also put their engineering expertise to work in designing a hydraulic ramp in the loading bay, so that egg trolleys can be wheeled straight into the lorries without the need for using the tail lift.

Already planning ahead, the footprint allows for an extension building of the same size. Built partly into the hillside, the first phase already features a change in floor level into the egg collecting room so that that the second phase, when it arrives, presents no problems.