Fresh oven-ready chicken, weight around 2kg, was the first poultry item to be branded as Label Rouge when the French quality assurance scheme was launched in 1968 – and it has retained pole position ever since.

Today 10 chickens in every 100 consumed in France carries the “red label” sticker, and this rises to two out of every three chickens sold by French supermarkets.

It is a degree of market penetration that must be unique and is a tribute to the pioneers who sat down nearly 50 years ago to knock the Label Rouge welfare assurance scheme into shape.

“The scheme guarantees that customers are buying into the genuine article. Production is controlled by a series of specifications and supervised from incubation to slaughter. Flocks are subject to some 25,000 mandatory inspections a year to check the birds’ health and welfare and that they are being reared in accordance with the label code.

“It has made a vital contribution to sustaining rural development and bird diversity. There are many small family farms still operating throughout France who would have been forced off the land and doing something else if it were not for label,” she said, estimating that 40% of all poultry farmers are growing Label Rouge poultry, which make up 10% of total poultry consumption.

Mrs Laszczyk warned that it would be a mistake to assume that the Label Rouge regime would work for all types of poultry. Price was always the limiting factor, as it could be 60% over the non-Label product.

But chicken meat was proving quite resilient. Before the credit crunch, annual output of Label Rouge was put at 105m chickens a year, valued at €450m (£382m). And, while overall poultry consumption stalled in 2009 after decades of steady expansion, consumers stayed faithful to the farm assured brand.

Throughout the financial crisis, Synalaf has maintained its impressive range of Label Rouge poultry lines. In addition to chicken, the range includes turkey joints, turkey pieces, ducks, geese, quail, caponised chicken, straight guinea fowl and caponised guinea fowl. Whole black and bronze turkeys for Christmas are grown for a minimum of 140 days, but not hung before being eviscerated as in the UK.

The controversial capon has special protective status on the grounds that it is a traditional product, part of the national heritage. The regulations controlling production require that caponisation must occur before nine weeks of age, rearing time is restricted to five months, stocking must be no more than 6.25 birds/sq m in house and 4 birds/sq m on range, minimum killing age is 150 days and oven-ready weights must be between 2.5kg and 3.5kg.

Breeders of capon strains use 46 crosses from old regional breeds to produce males with strong enough legs to carry the birds through to the full 150 days. The poulard – females from capon breeding flocks – have their own rearing code to produce 1.8kg of meat “of tender, incomparable flavour” and must be farmed no more than two hours’ drive from the point of slaughter and retail.

Marketing of the capon flocks is restricted to the Christmas season and demand has remained strong, despite some controversy surrounding the methods of production – or perhaps even because of it? “We prefer to believe that it is because of the superb eating quality of the capon,” said Mrs Laszczyk.

One of the aims set by the founding fathers of Label Rouge was to add value to free-range chicken by lifting it out of what was threatening to become a commodity market. The latest results from the two largest poultry meat companies in France – LDC, which majors on Label Rouge, and Doux Poultry, which does not – indicate that this objective has been met.

In 2008 the two companies achieved very similar turnover of about E1.7bn each (£1.45bn). But while Doux Poultry hit this figure by processing some 1.7m tonnes of poultry, LDC managed it with just 430,000t of quality assured birds. 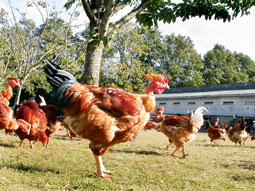 Until Gilberte and Herve Croc became Label Rouge chicken growers in 1997, Mrs Croc worked in the local pharmacy to bring in enough money to support the mixed family farm near Rennes in Brittany.

But now her two 4000 bird free-range meat flocks have taken over, helping to make the whole farm viable. Two years ago they paid off all the loans needed to pay for their two rearing houses. “It was a great weight off my mind and the happiest day in my time as a chicken farmer,” she told Poultry World.

She explained how day-old chicks were reared to 81 days and were then collected and processed by Janze, a leading name in Label Rouge.

The flocks were reared to strict standards and the contract was based on tight specifications. “If the buyer asks for 2.1kg birds and we give them 2.3kg, we do not get paid for the extra weight,” she said.