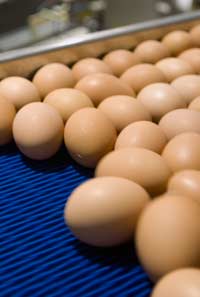 The Food Standards Agency has issued new online advice on the safe use of eggs in catering, particularly the practice of pooling eggs.

Eggs can occasionally contain salmonella inside or on their shells, so it’s important for caterers to be careful how they handle and use them, said the FSA. This is particularly the case when catering for more vulnerable people, such as elderly people, babies, toddlers, pregnant women and people who are already unwell are most likely to become seriously ill from food poisoning.

On top of this, a recent survey revealed poor egg handling practices in restaurants and by caterers.

The new FSA guidance covers handling, storing and cooking eggs, using pasteurised egg, and catering for vulnerable groups. It also gives tips on pooling eggs, where caterers break lots of eggs into a bowl and use the mix throughout the day.

“Eggs may contain salmonella bacteria inside or on their shells, so it is very important for caterers to prevent bacteria spreading from eggs on to other foods, hands, work surfaces or utensils, and also to cook them properly so that any bacteria are killed,” said the FSA.

Pooling is a common practice in catering and it’s important for caterers to be careful how they handle pooled eggs. They should avoid keeping large amounts of pooled liquid egg at room temperature – instead they should cover it, store it in the fridge and take out a small amount as and when needed.

“Ideally, pooled liquid egg should be used on the same day, so caterers should only break the eggs they will need for the day and avoid storing the liquid egg for more than 24 hours. It’s also important never to add new eggs to a batch of liquid egg – they should use one batch up and then start another.”