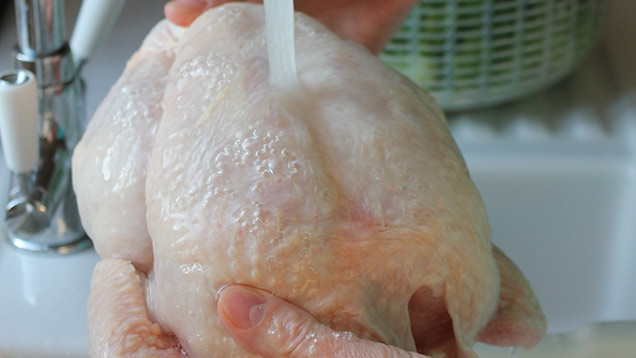 The Food Standards Agency (FSA) has challenged the supermarkets that have not yet published results from their campylobacter reduction strategies to do so, as its full-year cumulative testing figures are released.

They reveal that, as expected, no retailer had met the target set by the FSA for fewer than 10% of whole birds to have the highest level of contamination by February 2015.

Three retailers have subsequently said they are now hitting that target, based on internal testing.

Of the 4,000 chickens bought by the FSA from supermarkets, shops and butchers, 19% tested positive for the highest level of contamination, with 79% having some contamination.

The FSA said only two retailers could be differentiated, when confidence intervals were taken in to account – Tesco with the lowest overall results and Asda with the highest.

Campylobacter poisoning, thought largely to derive from poultry, is estimated to make 280,000 people sick each year in the UK, making its reduction a priority for government.

Morrison’s, Marks and Spencer and Waitrose each released recent testing data, which show more encouraging figures – a move welcomed by Steve Wearne, policy director at the FSA.  The Co-op published its strategy, but said it was too early for detailed figures.

Marks and Spencer claimed 7% of birds now had the highest levels of contamination, following an end to thinning in poultry farms, enhanced biosecurity and “blast surface chilling” carcases in the slaughterhouse.

Morrison’s said just 2.3% of birds it had tested since January were heavily contaminated, well below the FSA’s 10% target.

Waitrose, along with its main supplier of poultry Moy Park, made a similar statement.

While positive, these initial results cover the colder months of the year, when campylobacter levels are known to be lower.

Mr Wearne said: “I want to challenge those retailers that haven’t yet demonstrated the impact Marks and Spencer, Morrison’s, the Co-op and Waitrose are having on reducing campylobacter on chickens on their shelves.

“We expect all retailers and processors to be achieving the reductions we have seen in these retailers’ figures – that’s the only way we will meet the target we all signed up to.”

He added that testing would continue, with another round set to begin in the summer. The FSA will also release the full data set for its enquiry, which ran from February 2014 to February 2015.

Breakdown of results by retailer