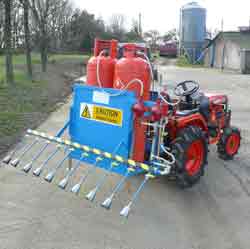 Thermoweed and Calor have developed an effective, but simple system based on heat which kills poultry pathogens.

“Poultry farmers are under increasing environmental pressure to reduce chemical use,” said Thermoweed’s Richard Pearson. “We believe we have developed a feasible solution in eliminating disease in poultry sheds.”

The poultry floor burner was developed after an approach by Martyn Scott of Agriwash, a contract cleaning company based in Thirsk, North Yorkshire working with many of the major growers, as well as other smaller companies.

Mr Scott said: “It is vital that poultry sheds are thoroughly cleaned and all diseases and pathogens eradicated. However, I have always been wary of some of the chemicals used by the industry for this purpose.

“We work with a lot of different growers, but the cleaning procedure is always the same. After removing the litter and washing down, we take the tractor mounted burner inside the shed and, at a walking pace, slowly burn the whole of the floor.

“We use two 47kg LPG cylinders offering coverage of up to 60,000sq ft. An additional hand lance enables producer to get into corners and around the bottom of roof supports.

“The feedback has been remarkable. We have worked with growers with bad cases of coccidiosis in their sheds, but after using the burner, there have been no subsequent cases. Some have totally ceased using chemicals all together for cleaning floors.”

The system also offers cost benefits. “For a shed measuring 100,000sq ft, the cost of LPG to power the burner is about £150, much less than the chemical costs of up to £500,” said Mr Pearson.

And there is a cost benefit by warming the shed prior to restocking, as Mr Scott described: “In one case we recorded a temperature of just 8C prior to cleaning, and after we had used the burner, the temperature had risen to 30C.”