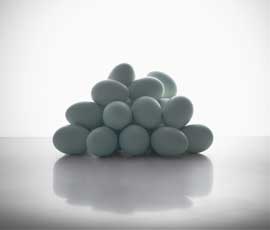 Scientists at the University of Nottingham have used pure breeds to identify the genetic anomaly that first produced a blue egg, following a four-year research project.

The first blue eggs came from a mutation in the Mapuche fowl, native to South America, and its European descendants, Aracuna, between 200 and 500 years ago.

Researchers found the cause was a harmless strain of a “retrovirus”; an infection that can permanently incorporate its own genetic material into the DNA of its host cell.

The effect of the retrovirus’ influence on DNA in this case was to trigger an accumulation of a green-blue bile pigment called biliverdin, which stains the eggshell blue as it develops in the hen.

David Wragg, a doctoral research fellow who led the team, said the mutation had been found in both South American and Asian chickens, and the chances of this were “extremely low”.

“It shows the importance of viruses in shaping evolution and diversity of species. It’s quite remarkable – retroviruses are generally considered to integrate at random locations in the genome.

“The unusual egg colouration must have attracted the attention of the owners who must be praised for having selected the trait in subsequent breeding.”

Professor Olivier Hanotte, who initiated the research, said: “This is an important discovery because some of these rarer native breeds of chicken with this unusual egg colour and high quality have become low in number and are in danger of disappearing if not conserved and, indeed, promoted by agriculture.”