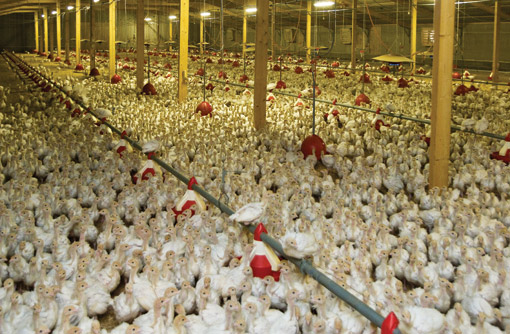 The increasing management requirements of modern broilers – a long way from older breeds – present both an opportunity and a challenge, believes Alan Thomson, regional commercial and technical manager for Aviagen.

“People who don’t know about what we do in this industry may think we’re just chicken farmers,” he says. “But chicken farming is a very technical role and it’s going to become increasingly so.”

He explains that the 35 days that a broiler spends in a farmer’s shed represents just 63% of its life, taking into account incubation. And, with the continual advances in feed engineering and genetic improvements, this time will get even shorter.

“If we go back even just 10 years, we were taking around seven days longer to get to slaughterweight per age.

“So what we’re doing today, all the management practices that we’re applying to a typical broiler flock, are applied in 17% less time,” Mr Thomson says. “This means that the management period is condensed and, while the birds’ performance is improved in terms of health, liveability, welfare and growth, they are more sensitive to management inputs.

“In those 35 days we take something in the region of 3.5kg of feed and about six litres of water, and a lot of other energy and management inputs, to take that bird to when we process it.”

Mr Thomson explains that the 3.5kg of feed typically contains 660g of protein and 10,500Kcal of energy – the equivalent of 10 sirloin steaks and enough calories to keep a human running for 15 hours straight.

Of the six litres of water, only around 25-30% goes towards meat production; the rest is lost through panting, in faeces and evaporation. In a 100,000-bird shed, that adds up to a “huge amount of water”, and has necessitated the development of more efficient ventilation systems that can micro-manage temperature and humidity.

“That’s what we give these birds over 35 days, and we expect them to take that feed, utilise and metabolise that energy and that protein, to live and thrive, and to grow. That’s going to be increasingly challenging over time.”

The first seven days are 20% of a bird’s life, and crucial to effective development. He points to a number of studies that show poor seven-day weight translates to poor weight at 35 days.

“This is why we talk about getting chicks started, gut development, development of appetite, stress management,” he explains. “This is the most feed efficient part of a bird’s life, and delayed birds don’t tend to catch up.”

At this stage the feed conversion ratio is around 1:1.1 and Mr Thomson describes the intestines were “the chicken’s engine room”. “It’s the motor that can convert all that feed and water into meat.”

He stresses that the management involved in optimising intestinal performance will become an increasingly technical role.

In particular, the development of the surface area in the first seven days make the real difference to digestibility and efficient feed conversion. “The villi will increase surface area by up to 15 times, the microvilli by about another 30.” Their development can be hampered by a number of factors, including stress, feed distribution and intestinal bacteria.

Mr Thomson explains that there are around 600-800 species of bacteria in the gut. “It’s hugely populated, and we don’t actually know what around 40% of them are; they’ve never been specified.”

Management of villi and microvilli, as well as careful stewardship of the bacterial environment, will become a more precise science, and performance will improve as a result.

“These broilers, and the breeders, will become increasingly sensitive to the management and influence that we provide them. The opportunity is huge, both to get it right, but unfortunately, also to get it wrong.”